Did William James ever say, write, or think anything about human beings using only 10% of our brains? No, nope, and no. An investigation: 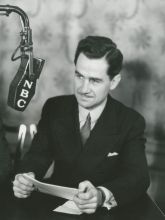 Because if you are going to make a claim—about anything at all—in the forward of a book that goes on to sell tens of millions of copies and remain continuously in print for nearly 80 years, you are going to be responsible for authoring a claim that will stick in the communal mind, that will become a part of how we as a culture think we understand ourselves. And as Lowell Thomas might have put it himself in his folksy manner of speaking, it was a doozy.

(Please note that I did not link to the Wikipedia biography of Lowell Thomas partly because it reads like it was written by someone who did not like the late broadcaster, and also because I am a Marist College graduate, Class of 1990, who spent many hours studying and working in the classrooms and television broadcast studios that were available to me in the: Lowell Thomas Building on the Marist campus. Go Red Foxes! I’m something of a fan of Lowell Thomas and his work.)

The claim in question comes at the end of his introduction to Dale Carnegie’s book, How to Win Friends and Influence People, which was one of the first modern self-help books. Thomas’ introduction is cinematic in its approach, which makes sense, as Thomas was the newsman to the movie-going public in the 1930s. Thus, the piece reads like a script to a newsreel. Thomas tells the stories of three people who had benefited from Carnegie’s famous public speaking and self-confidence course and then tells the mildly heroic tale of Carnegie himself, the entire tale, almost from his beginning as a zygote full of promise up till the present day, in a breezy few pages.

In his college days, we learn, Carnegie was embarrassed by his family’s rural poverty and wanted to come up with something to stand out among his classmates. (Carnegie was born in Missouri in 1888, so this would be 1906 or so at State Teacher’s College, which is now Central Missouri State University. Go Mules!) Because he was neither an athlete nor an actor, he thought he would attract attention as an orator and join the debate society:

Realizing that he had no flair for athletics, he decided to win one of the speaking contests. He spent months preparing his talks. He practiced as he sat in the saddle galloping to college and back; he practiced his speeches as he milked the cows; and then he mounted a bale of hay in the barn and with great gusto and gestures harangued the frightened pigeons about the issues of the day.

But in spite of all his earnestness and preparation, he met with defeat after defeat. He was eighteen at the time—sensitive and proud. He became so discouraged, so depressed, that he even thought of suicide. And then suddenly he began to win, not one contest, but every speaking contest in college. Other students pleaded with him to train them; and they won also.

Picture pages flying off a calendar and then picture a train and a map of the lower 48 states with a line taking us from city to city. Maybe the picture shifts from black and white to color. Thomas was a movie maker and radio personality and he knew how to make even a quiet intellectual effort—a life spent helping others to gain self-confidence—read like a hero’s journey:

Dale Carnegie claimed that all people can talk when they get mad. He said that if you hit the most ignorant man in town on the jaw and knock him down, he would get on his feet and talk with an eloquence, heat and emphasis that would have rivaled that world-famous orator William Jennings Bryan at the height of his career. He claimed that almost any person can speak acceptably in public if he or she has self-confidence and an idea that is boiling and stewing within.

The way to develop self-confidence, he said, is to do the thing you fear to do and get a record of successful experiences behind you.

At the end, Thomas sums up Carnegie’s gift to the world: “Professor William James of Harvard used to say that the average person develops only 10 percent of his latent mental ability. Dale Carnegie, by helping business men and women to develop their latent possibilities, created one of the most significant movements in adult education.” That is the claim. The word “latent” is the only element connecting these two thoughts. James is one of those figures in American history whose quotes have proved to be very useful for popular writers even when they are taken out of context. Or, I should say, especially when they are taken out of context.

To the best of anyone’s intellectual reconstruction, William James never said anything of the sort. It is known that he carefully watched a colleague educate his child in an enhanced way with the goal of achieving a superior intellect. (The outcome was a sad one: the child in adulthood had a difficult, and short, life.) In nonacademic lectures, that is, lectures delivered to entertain and educate more than to explore ideas, James apparently used to say to his audiences something about how human beings use only a portion of their available intellectual energy, that we do not meet our full potential. Which is probably true or perhaps is not. But there is no quote from James himself, no notes from his many lectures, no comment in the margin of a book. He did not even take up 10 percent of his writings with the 10 percent idea. It was a throwaway line that not even people who attended his lectures have recorded anywhere.

Decades later, by the time Thomas wrote his sentence—please note that he reports it as something James “used to say”—the thought must have been a common one. So common that it acquired a specific percentage, ten percent, and the idea was shifted from human intellectual “potential” (about which we can throw around percentages all we may want, one hundred percent of the time) to our brains, our real mental ability.

We only use ten percent of our thought-thinkers. Everybody knows that. Thomas wrote his introduction to read like an after-dinner speech, which of course is no accident: it is an introduction to Dale Carnegie’s public speaking (and more) book, and everything Lowell Thomas ever said out loud sounded like it was ready to be delivered at an after-dinner speech, anyway. In Carnegie’s world, and Thomas’, “potential” is everything. It is something we all possess. It is as American a conceit as anything we Americans ever tell ourselves about ourselves: Live up to your potential. Progress, progress, progress. Shoot for the stars and be happy to hit the moon.

Neuroscience is not proving the thought to be correct; the closest one can come to the idea in reality is that our brains are complex, that our brains use one-hundred percent of available neurons at all times, that general maps of the brain are generally correct but each person’s brain appears to be unique and possesses fluid boundaries among those general areas, and that we at most pay attention to about ten percent of what our brain is doing at any moment anyway. (I just typed that sentence without paying attention to the location of the keys and while listening to a bird that ought not be outside my window in October. My brain is humming along quite well without me. I’m not even at ten percent today.)

Earlier in Thomas’ introduction, he mentions that Carnegie has personally overseen and critiqued 150,000 speeches given by people taking his course. The source he gives is Ripley’s Believe-It-or-Not, which is not a source one cites for, well, anything. And where did Mr. Ripley use find this specific figure? The source for the statistic was: Dale Carnegie. (Palm of hand to forehead of face.)

Thomas continues with even more math: “If that grand total doesn’t impress you, remember that it meant one talk for almost every day that has passed since Columbus discovered America. Or, to put it in other words, if all the people who had spoken before him had used only three minutes and had appeared before him in succession, it would have taken ten months, listening day and night, to hear them all.” Well, okay. That circle of citations citing citations created for the sake of citing them is not a bad thing in and of itself; it’s after-dinner talk logic. It’s logic like that that probably landed us the “ten percent of our brains” idea in the first place. (When giving a speech, use numbers because numbers sound like facts ninety-nine percent of the time.)

That “ten percent” idea was presented by one of the great communicators (Lowell Thomas) inside a sales pitch written to persuade readers to buy and read a copy of one of the great instruction manuals about honest, persuasive salesmanship. Eighty years later, we have a movie like Lucy that depicts what might happen when a hero uses the remaining ninety percent of her purported brain power. That movie has earned almost half a billion dollars since it was released in 2014. The estates of William James, Dale Carnegie, and Lowell Thomas should sue for a cut.