The photo above was taken at Nauset Beach on Cape Cod on a December afternoon in 2010; the white glaze covering the footprints is ice and snow, and the Atlantic has ice in it—some of the white caps were frozen, and the waves merely swelled them, shifted them. (It was taken with a not-smart cell phone held in chittering fingers, both of which contribute to its blurry artsy-ness, or perhaps just its blurriness.)

Henry Beston wrote perhaps the best physical description of Cape Cod in the opening lines to his classic book “The Outermost House“:

“East and ahead of the coast of North America, some thirty miles and more from the inner shores of Massachusetts, there stands in the open Atlantic the last fragment of an ancient and vanished land. For twenty miles this last and outer earth faces the ever hostile ocean in the form of a great eroded cliff of earth and clay, the undulations and levels of whose rim now stand a hundred, now a hundred and fifty feet above the tides. Worn by the breakers and the rains, and disintegrated by the wind, it still stands bold.”

He depicts an heroic shoreline, a land that declares its own terms of surrender against a hostile, battering sea. Given that from the air Cape Cod resembles a single raised fist jutting into the sea, a heroic, Byronesque, cliff face is only appropriate. 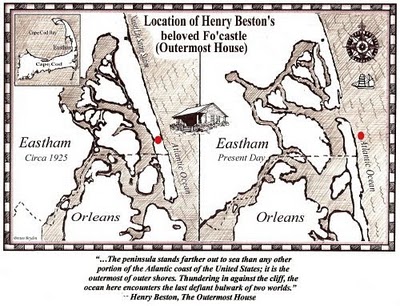 Beston built a house, a 20 x 16-foot cabin on the dunes near Eastham, Massachustts, along the Cape’s forearm, in 1925.

My photo was taken from near where Beston’s cabin used to stand. The dwelling faced the ocean, and its many windows offered him a view of the water that made him feel like he was on a ship. Thus he called the house the “Fo’castle,” but it became known as the “outermost house” for an obvious reason: it sat at what seemed like the end of the earth. Beston never lived full-time in his shanty, but he spent enough time there to write his book, which is subtitled, “A Year of Life on The Great Beach of Cape Cod.” Picking epic-seeming events from each of the four seasons he experienced gives his “year” an intensity of action and feeling. The book was published in 1928 by Doubleday.

As a young man, I knew that I loved Cape Cod, for reasons of family and fun, but it was not until I devoured Henry Beston’s short, 218-page, book that I found the deeper reasons. It would be a beautiful thing if every place on our planet could have a writer fall so utterly in love with it, as Cape Cod had Henry Beston. (Perhaps I will be the Henry Beston of Goshen, New York.) Beston’s brief meditation on the slow, usually imperceptible rhythms of nature—imperceptible because few bother to perceive them and communicate anything about them—is written in a muscular language that makes the surf appear to have desires and dreams, the wind have language, the birds individual personalities.

It is not easy to take memorable landscape photos; the camera may capture every detail of a detail-packed outdoors scene, but a photographer’s eye and hand is needed to direct our eyes to what he or she finds worth looking at. Otherwise, every beach snapshot is every other beach snapshot; they are all alike in their uniqueness of sky and sand. The nature writer has even more difficulties: he could fill his pages with yelps like, “It was such a stupendous night sky full of stars! You should have seen it,” and thus bore us with banal generalities, or, lurching in the other direction, bore us to tears with specifics. Beston finds the poetry in using the correctly applied terminology of whatever phenomena he describes. This was a revelation to my then twenty-year-old self. 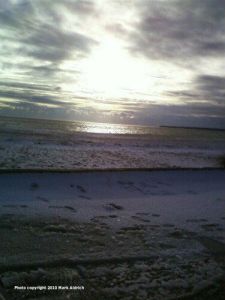 Cape Cod, winter 2010. Photo by The Gad About Town

Winter from atop the dunes is neither “frigid” nor “bitter,” two words that may find their way into one’s letters home; in “The Outermost House” it is “crystalline” and the snow is dancing and driving:

“The snow skirred along the beach, the wind suffering it no rest; I saw little whirlpools of it driving down the sand into the onrush of the breakers, it gathered in the footprints of the coast guard patrols, building up on their leeward side and patterning them in white on an empty beach. The very snow in the air had a character of its own, for it was the snow of the outer Cape and the North Atlantic, snow icy and crystalline, and sweeping across the dunes and moors rather than down upon them.”

When the National Park Service was evaluating the arguments for establishing the Cape Cod National Seashore, Beston’s book was cited frequently in the report’s pages. Beston died in 1968, and a sentence from “The Outermost House” is his epitaph: “Creation is still going on, the creative forces are as great and active today as they have ever been, and tomorrow’s morning will be as heroic as any of the world.” The cabin itself, the Fo’castle, was swept away by the Blizzard of 1978, a nor’easter of heroic strength with historic effects; in other words, a storm that Henry Beston would have appreciated. The spot on the beach where the cabin stood, once atop the dunes, is now under the Atlantic Ocean, a portion of the Cape that the sea has reclaimed for itself.

No single development at any one location on the beach would have phased this wondering, passionate naturalist and writer, though:

“And what of Nature itself, you say—that callous and cruel engine, red in tooth and fang? Well, it is not so much an engine as you think. As for ‘red in tooth and fang,’ whenever I hear that phrase or its intellectual echoes I know that some passer-by has been getting life from books. It is true that there are grim arrangements. Beware of judging them by whatever human values are in style. As well expect Nature to answer to your human values as to come into your house and sit in a chair. The economy of nature, its checks and balances, its measurements of competing life—all this is its great marvel and has an ethic of its own. Live in Nature, and you will soon see that for all its non-human rhythm, it is no cave of pain.”

* * * *
A documentary about Henry Beston and Outermost House is in production: