In Act 2, Scene 2, of Hamlet, the doomed Rosencrantz and Guildenstern are chatting with Prince Hamlet. They are his old college buddies, and King Claudius (Hamlet’s step-father) and Queen Gertrude (his mother) have sent for them to attempt to learn what is bothering the young man, who has been acting with an “antic disposition” and saying strange things, half to himself and half to, well, no one can figure out who.

Hamlet greets them and speaks in the same riddling manner that he has been using with the rest:

HAMLET: Let me question more in particular, my good friends, what you have done to deserve such fortune, that she sends you to prison hither?
GUILDENSTERN: Prison, my lord?
HAMLET: Denmark’s a prison.
ROSENCRANTZ: Then the world is one.
HAMLET: A goodly one; in which there are many confines, wards, and dungeons, Denmark being one o’ the worst.
ROSENCRANTZ: We don’t think so, my lord.
HAMLET: Why, then ’tis none to you; for there is nothing either good or bad but thinking makes it so. To me it is a prison. [Emphasis mine.]

Hamlet quickly determines that they are not merely dropping in to talk about sports and the weather or to compare Klout scores but are indeed spies. Ultimately, he manages to have them both killed.

Hamlet’s quip about how one’s thinking determines a thing’s relative goodness or badness has lived on through the centuries, but in most peoples’ recitations nowadays it carries about the same weight as a Twittering teenager’s hashtagging of “YOLO.” (#YOLO. #Ugh.) Perhaps this is because the judgement is delivered by a character who has been speaking in riddles and jests and pretending to be mad. (Uh, Hamlet, “What are you reading?” “Words, words, words.” Petulant jerk.)

Four hundred years after Hamlet was first performed, “Nothing (is) either good or bad but my thinking makes it so” is spoken as a longer, a more profound-sounding, version of, “Don’t sweat the small stuff.”

“The rain is uncomfortable for you but it’s good news for the farmers,” speaks the profound thinker who apparently wants me to punch him. (I once replied to this with a “Do you know any farmers? We live in the suburbs. If you do, see if they’re carrying umbrellas, too.” The person walked away, which of course was the only proper reply to my being a petulant jerk.)

(The two of us are still friends. I have my good points, I have been told.) 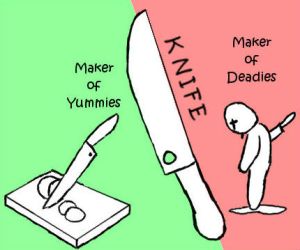 Many people resist strongly and vocally when it is suggested to them that, taken existentially, Shakespeare and/or Hamlet is right. Our perception is all that defines good from bad. A happy event, in and of itself, is not inherently a good thing. Outside of love, whatever that is, there is no such thing as “good.” And a tragic happening, a sad event, is not by definition evil. (Just to be clear, I would never insist on this philosophical point with someone who is enduring a deep loss or a terrible sadness. Perhaps this makes me a philosophical wimp, an existential compromiser, but I like to sleep at night.) We carry with us a deep commitment to the idea that there is evil in the universe as well as good, that good inheres in things we like and love, and that evil is a containable reality, too. This is because most of us combine and conflate the notions of sad with bad and happy with good.

Some of the saddest things that I have witnessed have had positive things follow them, possibly as a result of reactions to the sad thing. Conversely, some of the best things that I might think I have done in this life may yet turn out to have terrible consequences.

For instance, I am disabled and that sucks, and I would not wish the experience to befall anyone, even people whom I dislike, but being disabled in America in this particular era gives me an income, a teeny-tiny one, which gives me the time to write, which is all I ever wanted to do or have. I watch people’s eyes light up with envy when I say that I do not have to punch a clock for the rest of my life if I choose to not do so. Which of these things is the sad thing and which is the happy one? Ah, but the income is so small that I can not jet off to those many exciting bloggers’ conferences that I have not been invited to and which may not exist. It’s a tiny stipend. I live in a room I rent from my girlfriend’s father, not a palatial “House of Gad.”

This is a small, personal example, I know, but reality resides on a spectrum and not in an either-or or zero-sum playhouse.

Sadness exists. Tragedy is a reality. But so is happiness. So is love.

Are there people who do wrong in this world? Yes. People who introduce sadness into peoples’ lives or who work for their own personal gain to the detriment of others around them? Of course. Hamlet was no murderer but he had Rosencrantz and Guildenstern killed. I know, these are fictional characters.

Look at Hitler’s baby picture. People celebrated that birth and cooed at the infant. Hitler existed.

If evil is inexplicable, well, then, so is good. We want all matters to be explicable, however, so we deploy terms like “good” and “evil” as if they are tools that explicate. They aren’t.

Further, our minds want there to be someone to credit or something to blame behind the good or the evil thing. There must be an explanation, goes the thinking. Thus, there must be a find-able motivation animating even the explicably good thing or the evil person. The great journalist Ron Rosenbaum (he follows me on Twitter!) explores this in his famous book, “Explaining Hitler,” which confronts the book buyer from the start, its front cover. Hitler’s baby picture sits there. Historians have searched for decades for the clues to pinpoint the moment baby Adolf became the monster Hitler. What was the cause? The explanation? It seems that it is not okay if there is not one. But “here there is no why,” as Martin Amis writes of Auschwitz.

Rosenbaum interviewed Alan Bullock, one of Hitler’s major biographers. “‘Some days, I ask God,’ Bullock told me, his voice dropping to an impassioned whisper, ‘If You were there, why didn’t You stop it?’ And then he added the sad lesson of a lifetime spent attempting to explain Hitler: ‘Never believe God is omnipotent.'”

Yehuda Bauer, a Holocaust Studies scholar, replies to Rosenbaum’s question, “Will there ever be a why?” “Bauer told me that he believes it is theoretically possible. ‘But the fact that something is explicable doesn’t say that we have explained it.'”

Terrible acts and tragedies are the horrible outliers of most human experiences. The beautiful thing is that love, great love and small love, is not. And it is just as inexplicable … until I gaze in my beloved’s eyes, and here there is no why, either.

* * * *
When this first appeared last year, a reader wrote, “I remember when I realized that Life never promised me anything. I think, as a society, we think that we deserve to have good things happen. In fact many good and bad experiences are random and have nothing to do with who we are. It’s our responsibility to take those experiences and do the best that we can with them.” I think she stated in a handful of words what it took me a thousand to start to express.

Also when this first appeared, someone wrote me a long comment explaining how Hitler was misunderstood. That no one died at Auschwitz. That there is no such thing as “Jewish,” and those that call themselves that (like me and my mother’s side of the family) never had a better friend than Der Führer. I seem to have deleted it, because this is my web site and I can decide for myself those things I think “good” and those things I think are “bad.” The comment itself was neither; she thought it was “good.”

This is the third time I have re-worked this, a piece originally from 2014.