A few light taps upon the pane made him turn to the window. It had begun to snow again. He watched sleepily the flakes, silver and dark, falling obliquely against the lamplight. The time had come for him to set out on his journey westward. Yes, the newspapers were right: snow was general all over Ireland. It was falling on every part of the dark central plain, on the treeless hills, falling softly upon the Bog of Allen and, farther westward, softly falling into the dark mutinous Shannon waves. It was falling, too, upon every part of the lonely churchyard on the hill where Michael Furey lay buried. It lay thickly drifted on the crooked crosses and headstones, on the spears of the little gate, on the barren thorns. His soul swooned slowly as he heard the snow falling faintly through the universe and faintly falling, like the descent of their last end, upon all the living and the dead.—James Joyce, the conclusion of “The Dead,” Dubliners

Cemeteries are cram-packed full with people who had other plans that day. Reservations for dinner, a movie ticket in the pocket. A refrigerator with new groceries. A sink with dirty dishes.

(I suppose it is never mundane for the person who experiences it, but I have not yet been there, not even been near it, and no one who has had the end moment has made a verifiable report about it. Tsk-tsk. Where are their priorities?)

I’ve written a couple tributes to departed friends (“Matt Coleman,” “Requiem for a Sponsor“), my girlfriend’s father, and I suppose there will be more, which is the sad and happy fact that anyone who continues to insist on breathing must accept: You will meet people and like/feel indifferent to and/or love/hate them, sometimes all at once. It’s confusing … and it isn’t at all. I continue to insist on breathing and I meet people every day.

I have a secret fantasy that at the end (MANY, MANY YEARS FROM NOW) I will have said so many more hellos than goodbyes that my job of catching up will keep us all here for a bit longer. And now it isn’t a secret.

The first time I set foot in my friend C.B.’s new apartment, almost two years ago, I did his dishes, and we found food in his refrigerator that one friend who was going to stay behind and feed his cats could eat. One load of laundry was still spun-wet in the washer and one was dry but cold in the dryer. Cheese was out for guests who were not supposed to be us. It had been set out a couple night earlier. He was 90 miles and an entire universe away in a hospital and was dead a couple days later. He had had a few strokes a couple nights before, soon after he put laundry in the dryer and set out food for an unknown guest who apparently did not visit. His last acts were witnessed only by his two cats. He was 52, which is an existential wrong.

Everyone has a friend who is the last one they expect they will bury; C.B. was that one for a lot of people. He was a fitness freak. Whenever I stood beside him, it is possible that I was the next friend they’d expect to …

And we found a piece of paper. My memory is that the sketch at the top of it, squiggles of a figure facing a sunrise or a sunset, was in pen, hand-drawn by my secretly artistic friend. I photographed it, and I thought I took the original with me (there were a couple copies), but today I could not find it to take a better photograph of it. Perhaps he does not mind; perhaps he does. (“Brudda, ya couldn’t hold onta my one poem?”)

And under it he wrote a poem which I know to be his because “To screw up, to be terrific” just sounds like how he sounded. After a while, your friends and loved ones can probably write the simplest things—your shopping lists, say—”just like how you sound.” I hope that some faces leaped to your mind on reading that; I am so lucky that I think this about several people in my life.

It is a simplified “St. Francis Prayer,” that poem that was not written by St. Francis and is only about one hundred years old, but who in the great goddamn cares, because it expresses ideal thoughts that us non-ideal humans ought to aspire to every day and even sometimes attain. (“… Grant that I may not so much seek to be consoled, as to console; To be understood, as to understand; To be loved as to love.”) It is that older prayer in action, enacted. Like my late friend, C.B. Always in action, but his act here on earth was completed a couple years ago.

Meditation by Morning Coffee
Open your eyes,
Be excited about today.
Feel it, smell it, touch it, taste it. It’s
One more day God has given you to sing,
shout, cry, smile, laugh, and get dirty.

To screw up, to be terrific, to ask for
help, and to be helpful.

To pray, to be the answer to someone’s
prayers.

To love and to be loved. 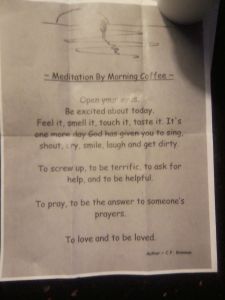 There is an expression that has been around for a long time, a “bucket list.” It seems to me that “love and be loved” just about covers it. That, and the famous reply the terminally ill Warren Zevon gave to David Letterman 10 months before his death. “Do you know something about life and death that maybe I don’t,” Letterman asked. “Enjoy every sandwich,” Zevon said.

It is a snowstorm-quiet morning in upstate New York. A winter storm dropped by today; the photo at top is from a few minutes ago.