* * * *
The sources behind Andrey Goncharenko’s wealth are not publicly known. Like many other members of the current generation of Russian oligarchs, both Goncharenko and his wealth appeared suddenly in the media. Two things are known about him: he is able to afford expensive pieces of London real estate, and he is shadowy enough to merit one (only one) mention in the Panama Papers.

Mr. Goncharenko does not live in the building and it is reported that he has not yet visited it. He has not spent the night in it. Lauri Love and a group of activists took over the building this week and some of them started sleeping there Wednesday night. The group intends to open the mansion as a homeless shelter.

Some media outlets are reporting that Love spent the night there, but sources in the house say that he has been a visitor. Some of the squatters are formerly homeless individuals. Some are self-described “anarchists.” The Evening Standard described the group as “exploring the dozens of empty rooms as music played on speakers powered from the mains.”

What effect if any this might have on Love’s legal status is unknown. Love, a 32-year-old Briton, is accused of stealing data from U.S. government agencies including the FBI and NASA, and the British government has agreed to extradite Love to the U.S. to face the charges. He and his legal team are appealing the extradition order.

Love is quoted in the Evening Standard article saying the group plans to use the space “constructively,” and added, “The police know we’re here. It’s not their problem really. This property is worth £100 million or something ridiculous and it’s not in use. It was bought by a foreign oligarch as an investment, and meanwhile there are good people sleeping on the streets. There are a lot of people with nowhere to stay, and a lot of buildings that are empty. The Government has criminalised residential squatting so the only way we can exercise squatter’s rights is in commercial buildings like this.”

The Guardian reports that the group calls itself the “Autonomous Nation of Anarchist Libertarians.” The acronym is right there in front of you. Humor abounds. The group has a Facebook page.

* to help house and feed and support the homeless and precariously housed.
* to screen films for general educational benefit and to provoke thought and discussion [The Internet’s Own Boy; I, Daniel Blake…]
* to hold workshops on various skills and activities in a DIY self-organised fashion [including poetry/spoken-word/rap with Potent Whisper Georgie PW!!!!]
* to facilitate debates and discussions on the clusterf*ck of crises we face this year and how we will push back against the darkening of history. These include:
– the NHS [National Health Service] under existential threat
– demonisation and oppression of migrants, refugees and minority groups
– the deterioration and outright failure of the UK’s social safety net and welfare state.
– the crisis of [empty] housing and the lack of government initiative to counter increasing cost of rents and decreasing prospects of home-ownership for youth and working/middle classes.

This week, the United Kingdom’s Department for Communities and Local Government released its 2016 homelessness statistics. (The phrase in British terms is “rough sleeping,” or people forced by circumstance to sleep outside.) The number of homeless individuals has increased in England for six straight years and the increase from 2015 to 2016 was sharp: a 16% increase. The department’s report does not count individuals who live in charity shelters or hostels or other forms of temporary housing. The numbers reported are those who are sleeping in bus shelters and parks. Almost 1000 people are homeless in London. Some charity groups charge that this number, even though it reflects an official increase, still understates the problem by a factor of eight; one group, St. Mungo’s, counted more than eight thousand homeless in London last year.

Love posted a photo about a half an hour ago from inside the new Belgravia homeless shelter: 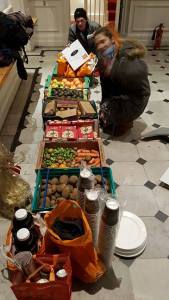 The group is readying the premises to help the homeless.

It is possible that the fact of the group taking over the London property of a Russian billionaire would attract media attention. Perhaps not international attention. Lauri Love is putting his new notoriety to work: articles about the action started to appear in the international press yesterday and many of them (not all of them) take the group’s stated desire to help the homeless seriously.

The group has requested help with supplies, support, and will set up an online fundraising page, which I will share here.

The group received a court order today informing its members that a hearing is scheduled for January 31.

As My Joints Turn