A few years ago I wrote about two artists who played with the question of whether what they are depicting is anything more or less than words on a page or paint on a surface. Both the poet George Herbert and the painter Arcimboldo make art of the question, What is art? Is it what it depicts, an idea about what it depicts, both at the same time (which makes it a third option), or something less than? Is art, by definition, always a misfire, in that a depiction of a thing is not the thing and never can be?

Arcimboldo painted portraits of character types rather than individuals; for instance, a librarian composed entirely of books or a gardener made of vegetables in a bowl. That latter painting depends on the viewer to decide to see the bowl filled with veggies or a human “face.”

When is a face a face and when is it a bowl of root vegetables? When is a painting a painting and something greater than a collection of chemicals on canvas? 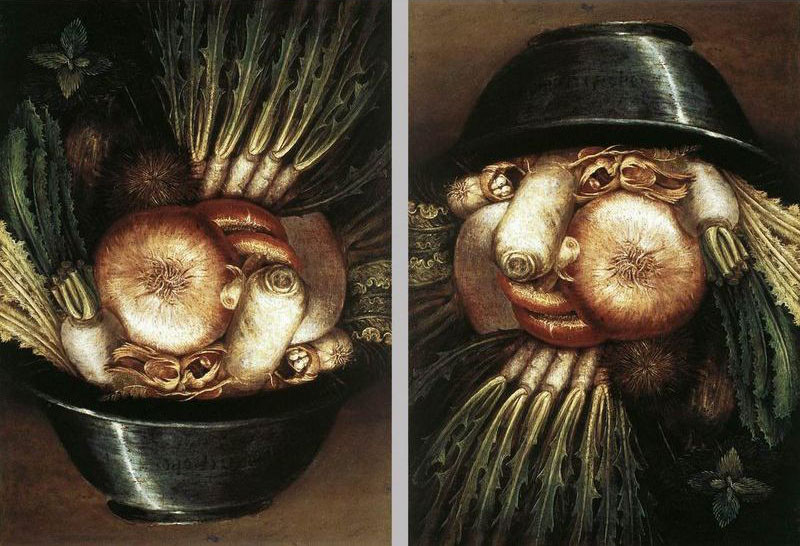 Vegetables In A Bowl, Or, The Gardener

George Herbert wrote poems about the only idea that he deemed to be worth considering: The eternal love of his Christian God and man’s time-and-space-and-language-constrained attempt to return that love. Two of his poems are written in the shape of what they are about. Like Arcimboldo painting a root vegetable for a nose, Herbert uses words to build an item; in one, “The Altar,” each word is a “stone” that makes up the altar that the poem is conceived as being:

A broken A L T A R, Lord, thy servant reares,
Made of a heart, and cemented with teares:
Whose parts are as thy hand did frame;
No workmans tool hath touch’d the same.
A H E A R T alone
Is such a stone,
As nothing but
Thy pow’r doth cut.
Wherefore each part
Of my hard heart
Meets in this frame,
To praise thy Name;
That, if I chance to hold my peace,
These stones to praise thee may not cease.
O let thy blessed S A C R I F I C E be mine,
And sanctifie this A L T A R to be thine.

This is how the poem ought to look: 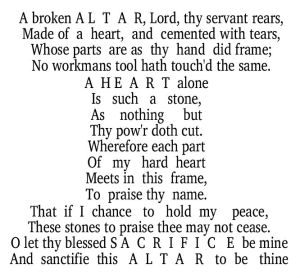 One word, even a single syllable, too many or one word mislaid or deleted, and there is no altar there. No “Altar.” It is an altar made of words but no less central to the life of a church than an altar made of stone.

The poem appears in the only book of poems that Herbert compiled himself, a book titled The Temple, which walks the reader, a “dejected poor soul,” through a church. Thus, his altar, “The Altar,” is centrally located in the book. (At Herbert’s request, the book was published posthumously, with his stated desire that it might bring “consolation of [to] any dejected poor soul.”)

It is probably an untranslatable poem, in fact if not sentiment. (Indeed, an—admittedly brief—survey has not yielded one.) The shape of the poem is dictated by the number of syllables created by his choice of words; it is a translation of an object, a real thing, into words, anyway, and as such it is forever a failure. But that is why it exists. It is a “broken altar.”

The human heart (the “HEART alone”) is the only perfect, unbroken, stone for worship, is the only true altar. All that his mind can make is something out of these pieces of meaning, words, and if he can get out of his own way (“if I chance to hold my peace”), these words as assembled here only exist to worship and love. They are what they are, words, and the words each on their own are not an altar, and a spoken version of this poem is not an altar, either. When is an altar an altar? At what point is a poem something other than, more than, words on a page?

However well-constructed it may be—it looks like an altar, for crying out loud—it does not matter. It is no altar. Not even a photorealistic painting of an altar would be an altar. Further, no altar is truly an ALTAR, as no earthly object is made of the only stone of faith that exists: the human heart “cut” by God.

Herbert’s faith was that of a man for whom questions about faith were a part of faith. His worship and his poetry exist in a space of failure, where a poem of an altar is not an altar but is a sort of altar, an attempt at one. His poetry depicts a figure who is struggling in every way to comprehend and return eternal love and who is met every time by a figure who replies that it all could come a bit easier than the work he is making of it. But all I have is language, Herbert’s speakers proclaim: “We say amiss / This or that is: / Thy word is all, if we could spell.”—from “The Flower.”

Herbert often describes the moment when the perceiving of love comes easily, and it is always sensuous, often reads as if it is written to a new love:

Who would have thought my shriveled heart
Could have recovered greenness? It was gone
Quite underground; as flowers depart
To see their mother-root, when they have blown—”The Flower”

But Herbert’s worshipper is always doubting himself, his faith, whether his faith is correct or not. In “Love (iii),” Herbert’s speaker is an unworthy guest in God’s (Love’s) home, but his host is gently persistent:

Love bade me welcome: yet my soul drew back.
Guiltie of dust and sinne.
But quick-ey’d Love, observing me grow slack
From my first entrance in,
Drew nearer to me, sweetly questioning
If I lack’d anything.

A guest, I answer’d, worthy to be here:
Love said, You shall be he.
I the unkinde, ungrateful? Ah, my deare,
I cannot look on thee.
Love took my hand, and smiling did reply,
Who made the eyes but I?

Truth Lord, but I have marr’d them: let my shame
Go where it doth deserve.
And know you not, sayes Love, who bore the blame?
My deare, then I will serve.
You must sit down, sayes Love, and taste my meat:
So I did sit and eat.

So if poetry is always at best an approximation of True Love, why not try to sing this struggle, as well? The “cheerfully agnostic” (which pretty closely describes me, as well) English composer Ralph Vaughan Williams created five songs out of four Herbert poems a little over a century ago. The suite is called Five Mystical Songs, and one, “Love Bade Me Welcome,” is a setting of “Love (iii).” Some churches use the last song, “Antiphon,” as a hymn sung by the congregation.

Here is Sir Thomas Allen performing the set (in two sections) with the BBC Symphony Orchestra: