He remains the only professional hockey player to play in six different decades: full-time from 1945-1980, when he retired at age 52—wait, pause there. 52.

And then he skated one shift for a professional minor league team in 1997, when he was almost 70. Six decades. Gordie Howe died today at the age of 88.

A Detroit Red Wing star for a quarter-century, Howe set scoring records in an era of tight defense. Thus there is a statue of him in Detroit and one in his Saskatchewan hometown. In game photos from the 1950s, he looks superimposed, like someone dropped a photo of an athlete from this era, dressed him in a vintage uniform, and Photoshopped him in: he was six feet tall, weighed 205 pounds, and so towered over his competitors.

For many Americans, his was the face of hockey, and he may have been the one Canadian most Americans could name for a couple decades running. Perhaps I should use the word “skating” in place of “running” there in his honor.

According to ESPN, his son “Murray Howe confirmed the death Friday, texting to The Associated Press: ‘Mr Hockey left peacefully, beautifully, and w no regrets.'”

Someone nicknamed him “Mr. Hockey,” and smart businessman that he was, he trademarked the name.

The broadcaster Keith Olbermann is friends with the Howe family and published two Tweets worth sharing:

Muhammad Ali and Gordie Howe in one week. Too much, too much… #RIP

And this great photo of the two together:

Gordie Howe may have taken more photos with more fans than any other athlete. Us in '96 #HeLetMeWearHisGlove #RIP https://t.co/w4nv2imcow 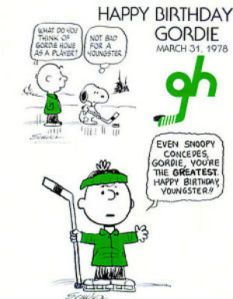