For the fourth time, the trial for Mahmoud Abu Zeid, the photojournalist known as “Shawkan,” was postponed today, April 23, by an Egyptian court, this time until May 10. He will remain in detention between now and then, and he will pass a grim milestone in two weeks: 1000 days in prison.

[Update: According to one source, a journalist named Mada Masr, “The court delayed the hearing because one of Shawkan’s co-defendants, who is in police custody, was not present in for the trial, said Karim Abdel Rady, a lawyer with the Arabic Network for Human Rights Information, who is representing Shawkan.”] The source reports that the co-defendant was not present because the police were detaining the person.

The photo above, credited to Mohamed Meteab, is from the court proceeding today: Shawkan is the smiling face on the left. Other photos from today’s hearing show him smiling the toothy grin that has become familiar to human rights supporters around the world, and other photos show the gritty reality, even when appended to a message of thanks from Shawkan himself, like this one, also from today (Below the fold):

"You keep me feeling that I’m not alone." #FreeShawkan pic.twitter.com/GGYmCkWKnG 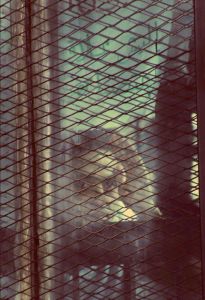 I asked the Freedom for Shawkan Facebook group what reason the court gave for the postponement. I have not heard back yet, but for each of the previous postponements there has been one reason offered: The court does not have the space to accommodate the hearing.

[Update #2: In an article in today’s Cairo Post, a lawyer affiliated with the case, Taher Abu el-Nasr, is quoted saying that he expects the trial to take a long time until a verdict is issued due to the huge number of defendants: “it might take the court 20-30 sessions to only hear the prosecution witnesses; this is something annoying and exhausting to everyone.”]

Because he was arrested in a widespread government crackdown, which was known as the “Rabaa Sit-in Dispersal,” Shawkan has been included with 737 other individuals (some sources have the number as 738 other defendants). All face similar charges of offenses against public order and national security, violence, murder, attacking security forces and civilians, engaging in armed conflicts, and destroying public facilities.

Mass trials with defendants held in large courtroom cages are not uncommon in Egypt and they are growing more common with the government’s paranoid practice of conducting mass arrests on vaporous and vague charges to force its form of control on its citizens.

Egypt’s justice ministry announced after the first postponement in December that it was moving the trial and all of the prisoners to Wadi Al-Natrun prison (far outside Cairo), where it claimed it could accommodate the 700+ defendants. Lumping defendants together always undermines every fair legal practice, from considering each case individually to presumption of innocence to introducing error into an individual’s story.

In February, Shawkan was confined to a “disciplinary cell” for four days, in other words, solitary confinement. His social media accounts describe a tiny cell, six feet by five-and-a-half feet (take a moment and measure that out), a daily slice of bread, a bucket, no blanket. There is a disgusting irony in placing him in this small cell for any length of time, whether one hour or from December till May 10, when the reason for all three court hearing delays has been the lack of space.

He wrote last month: “I want any sane person to answer me: What is going on? Why am I being unfairly placed in solitary confinement? Has it not been enough to have spent almost 1,000 days in detention unfairly and on false grounds? A thousand and one nights?”

As of today, April 23, Shawkan has spent 984 days in prison and has not yet had his case heard by a court. Amnesty International UK has made a priority of Shawkan’s story and it sits atop its list of “Urgent Action Network” cases. Please sign its petition and utilize its Twitter tools.

For his Facebook page last month, Shawkan dictated a thank you note to his supporters:

I want to send my deep love and respect and my appreciation of all what you are doing for me. I feel so lucky to have such kind people like you. And indeed it’s my honor to count you as my friends.
KEEP SHOUTING, “JOURNALISM IS NOT A CRIME”
Shawkan
Tora Prison
DON’T FORGET SHAWKAN
‪#‎FreeShawkan‬

"You all have become my power and my energy and without all of you I cannot go through this." #FreeShawkan pic.twitter.com/mQVN2ST7Xo

What follows is my column from December 2014, “A Message from Shawkan,” which supplies some more details:

* * * *
Mahmoud Abu Zeid is a photojournalist whose work you may very well have seen in recent years, as his photographs have appeared in Time magazine, news services throughout Europe, and they were syndicated by Corbis, a major syndicate. (One photo is reprinted below the fold.) He photographed everyday life in Egypt as well as breaking news stories like the protests in Tahrir Square and the trial of former president Hosni Mubarak. His professional name is Shawkan.

Shawkan was arrested in Cairo, Egypt, in a round-up during nation-wide protests on August 14, 2013. He was arrested while doing his job, while taking photos of the protests and the crackdown. It is believed that about 1000 people lost their lives across Egypt in the police actions against the protests that day, and several thousand were arrested, all in the name of stopping the Muslim Brotherhood. Shawkan was arrested in a mass round-up, and he remains just one more face and name in a large crowd: on December 12, he will be a part of a “mass trial of 738 defendants.”

As of today, March 26, 2016, he has spent 955 days in pre-trial detention. Before his first court session was postponed in December, his lawyer reported to Amnesty International that he had yet to see Shawkan’s case file. Under Egyptian law, there is a two-year cap on pre-trial detention; 955 days is longer than two years.

Shawkan sent a letter from Tora Prison to his friends on December 1, and they published it yesterday on his website. It reads:

In the next few days, finally I’m going to at least know my destiny. But, I do not know how am I feeling? In no way do I feel like it will be my justice day.

I do not want to disappoint you, I am just trying to be real. In my country we have lost meaning of that kind of words. Of course after more than 850 days in the black hole without fairness and justice, I am lost in limbo.

Just because I was doing my job as a photographer, I am in jail without even knowing why am I here?! I’m sorry to tell you that ‘I became a person of full of hopelessness.’

This is my new me. However, I keep resisting my new me because of you and only because all of you, all the people and all supporters who are standing by me.

You keep me feeling that I’m not alone. You all have become my power and my energy and without all of you I can not go through this. I want to send my deep love and respect and my appreciation of all what you are doing for me. I feel so lucky to have such kind people like you. And indeed it’s my honor to count you as my friends.

Two years and several months without hearing charges is ludicrous, of course, but it also goes against international norms and even Egyptian law itself. As Amnesty reports, “The Egyptian Code of Criminal Procedures in its article 143 limits pre-trial detention to up to two years and orders the immediate release of a detainee if not sentenced within that period.”

Thus, two days before his second anniversary in prison, Shawkan and some 400 others had their cases referred to criminal court, but his lawyers (and, I presume, the lawyers of all the hundreds of others) learned about this after the fact. Thus, none of the individuals could mount a defense.

It could be said that Egyptian officials paid sarcastic lip service to the country’s own laws. Egypt officially played by its own rules of not detaining these individuals beyond two years each, but unofficially, by not informing the individuals or their representatives of the cases against them, Egypt is playing a shell game with these lives. Shawkan faces charges, it is believed, of being a member of the Muslim Brotherhood, of possessing firearms, and of murder.

It is known that Shawkan was questioned without a defense lawyer being present back in 2013. In other letters, he describes what he has faced and is still confronted with: he was beaten several times, was kept in an overcrowded detention chamber, was kept outdoors in the summer heat. He reported in April 2015 that he had been “kept like an animal.” In August, after his case was referred to criminal court, he was moved to Tora Prison, so the conditions he has faced for these last few months have actually declined in quality. In Egypt there is no difference in treatment between a person convicted and a person yet to hear the charges against him.

To make matters worse, Shawkan learned before his arrest that he is ill with Hepatitis C and he has been denied his medications or any medical care.

President al-Sisi’s government has all but openly declared war against journalists. For a legal system, any legal system in any country, to loudly ignore evidence that it has wrongly detained a person, to contravene legal norms in every country by refusing to offer that person’s defense team any information about what the accusations are he is facing, much less to deny that individual basic humane treatment … well, those actions do not even meet the not very high standards of a nation’s rules of engagement during wartime. We treat opponents on a battlefield better than President al-Sisi treats detainees, especially journalists who have been arrested. (My nation does not have the cleanest of hands in treatment of detainees.)

The Committee to Protect Journalists has been supporting Shawkan since his arrest. Avaaz.org has an online petition that will be delivered to Judge Adly Mansour, Head of Egypt’s High Constitutional Court. Amnesty International has been reporting with greater and greater urgency about Shawkan’s imprisonment, especially after his December hearing was announced. There is a Facebook page.

Here is a sample of Shawkan’s work, taken from the more than 2000 photos available on his Demotix portfolio: 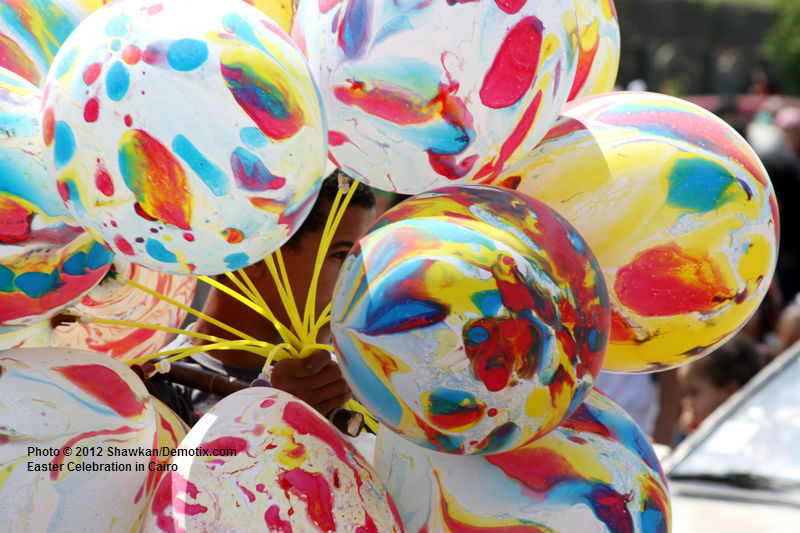 Easter in Cairo, by Shawkan

He is good at what he does.