It is said that Albert Einstein once asked, “If a cluttered desk is a sign of a cluttered mind, what are we to think of an empty desk?” While not famous for his quips—although E=mc2 is the soul of wit in its brevity—this neatly captures the perspective of a person who kept his desk almost confrontationally cluttered.

The human mind is an organizer, the greatest one we happen to know, the one that all of our tools and machines are built in an attempt to replicate its principles and imagined actions. Nature itself does not organize. Every organizing structure we come up with is an imposition on nature and is thus radically random, at least as far as nature is concerned: No method of organizing is more “correct” than any other.

Alphabetical order? Which alphabet? In “forward” or “reverse” order? Do we use “The” or its equivalent or no?

Size? I partly organize my bookshelf by the size of books (see above), the heavier ones on the bottom or on the floor (thus, not even on the bookshelf) because the current shelf needs reinforcing. (Jen wants me to replace it, yesterday.)

Or one could organize an argument by number of words used in each section, largest first. Juries would return verdicts of “confused.”

(Jen’s cat, AKA “Ángel, el gato de amor,” has one organizing principle and only one, and the work of perfecting her world with it occupies much of her day, many of her few waking hours:

“This thing, on this space that I want to occupy, must be removed. I must move it off this space. Then, when I move somewhere else, as I must—WHY DID YOU PUT SOMETHING THERE?! This must go, too.” And she pushes the offending pen or paper or book off the desk. I am awaiting the day I will see her use one object to move a second, larger, object off a space. That day, the day she has figured out that tools exist, will be commemorated henceforth by those of her breed.)

The human mind finds and makes connections between things and ideas, or the representations of ideas: words, papers, books. In an ideal sense, all ideas are equal. The work of organizing, re-cluttering, and finding new connections is a creative act. Thus, Einstein was right, as far as I am concerned, at least until I clean my desk, at which time I will change my mind about this: A cluttered work space is the same as an organized work space, it’s just that only one of them meets some person’s random aesthetic standards of ideal desk appearance.

* * * *
I have lived with hyper-organized spaces that I created for myself: Books separated by subject and then alphabetized within those subjects (left to right, by author last name). Subjects organized alphabetically, too. Multiple titles by the same author within a section arranged chronologically by publication date.

(The wife of a famous writer—Whitley Strieber—once tried to start a fight with me over how our bookstore organized its books. That was not fun. The store’s owners organized the store by subject and then alphabetically, but in two different ways, neither of which suited Mrs. S’s specific preference: That her husband’s name be prominent everywhere at all times for reasons of income. The majority of the store was alphabetical by author within the various sections, but the privileged section of new hardcovers, the shelves of new releases nearest the door, well, the books on those shelves were alphabetical by title. [The reasoning, which can be argued with but came out of the store owners’ experiences, went that most customers in search of a new book that they had heard about had heard the title of the book and not the author’s name, especially if it was a new author. Again, all organization is random. Back to the anecdote.] Thus, Mr. S’s newest title, which we indeed had on display, was on a lower shelf because it did not begin with A, and his paperbacks, with his last name starting with S, were not at that very moment at eye height. “Sometimes they are at eye height,” I pointlessly replied. After she and I stared at each other for a moment, the famous writer paid for his purchases, placed his arm around his wife’s shoulder, and they started out the door. But at the door he turned, looked at me over his wife’s head and said, “You’ll have to excuse my wife. She’s rather eccentric.”)

(I had an officemate who used to photograph the real-life top of his desk and make that image of the desk’s top his computer screen’s desktop image, so when you were talking with him at his desk you were looking at a real-life version of Pink Floyd’s “Ummagumma” album cover. Desktop > desktop > desktop. He would regularly update the photo to reflect current changes on his 3-D “real” desktop like the content of his IN/OUT box or his children’s school pictures.) 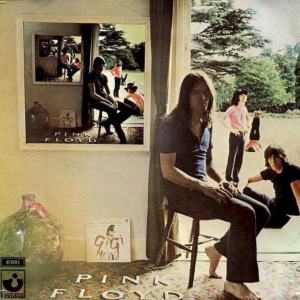 I haven’t listened to Ummagumma in quite a while.

In the past, I have worked on organizing my kitchen, only to discover how inefficient that made me. I alphabetized the spices. I have arranged the clothes in my closet by color. My baseball card collections (many complete sets) were always divided into American and then National leagues, and then broken into teams, my favorites first, favorite players on each team towards the front.

Perhaps you have noticed that, in the past, I was kind of a rigid idiot.

Finally it occurred to me that the best, most efficient, kitchen organizing principle was “frequency of use near the areas of frequent use.” And that principle, which really is a just-barely controlled entropy, is what guides most of my organization now.