The company that owns Columbia House, something called Pride Tree Holdings, Inc., announced today that it would be selling off what remains of the former music retailer at bankruptcy auction because it owns assets worth $2 million while it owes more than $63 million. (Pride Tree’s website is cheerfully ominous: it features a photo of an enormous, top-heavy, tree, a paragraph about the company, and a “Contact Us” button. And that is it.)

In that storage unit of memory there sit probably 100 CDs purchased from Columbia House for, oh, not a dime. Not even a thought of sending money, at least not a penny more than the penny I affixed to the cardboard order form I sent in every so often when I wanted to plump up my music collection.

As a company, Columbia House was perhaps the best-run direct supply retail business in America in its prime, through the 1990s. Records show that in 1996, the company earned more than $1.4 billion, and that is probably one of the years the company sent me a dozen CDs for a penny. By rights, it should have been $1.4 billion plus a hundred bucks from the graduate student slacker in New Paltz, NY. Thus: $1,400,000,100.01.

Almost anyone who lived in America and ever held a magazine in their hands in the 1980s and ’90s experienced the moment of annoyance turning into excitement when a piece of cardboard un-attached to anything in the magazine would come floating into one’s lap at the moment of fantasizing about buying a bunch of new CDs (or 8-track cassettes in the ’80s) if only they had a few bucks to spare. The Columbia House ad was a page or two of cardboard stock with line after line of up to 100 minuscule album titles with a six-digit code to write down on the order card that had floated into one’s lap.

I must have filled out dozens of these cards over the years in a bored public laundromat fantasy of purchasing power. And every so often, I would say, “Screw it, I’m gong to send it in.” 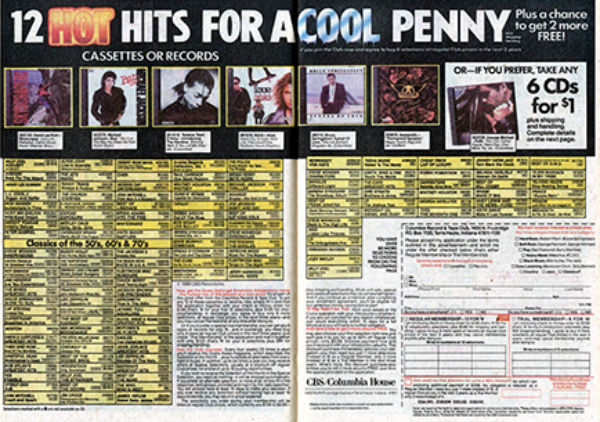 Lose yourself in a fantasy of owning 12 for a penny …

And the offer was almost too good to be true, except, and here’s the catch: It wasn’t. A month later, with a reliability that take-out restaurants might have envied, the box of CDs would arrive from Columbia House, the greatest retailer fulfillment department in America. I hope its executives and employees from the ’80s and ’90s have found work with today’s great retailers.

Columbia House varied its offers in a constant survey of what might work and what might not. One offer, the one a lot of people still remember and might be finding difficult to explain to their teenagers today (“Seriously, they actually did this”) was the “Get X number of tapes for one cent” offer, in which the purchaser would tape a penny to the card on which they had circled or written down the code numbers for their desired recordings. The purchase counted as an automatic membership in the Columbia House club, which meant the purchaser was promising to purchase eight or ten more albums at full price plus shipping and handling over the next three or five years, depending on the card you used. The penny was a terms and conditions agreement, like the ones we all check off without reading the actual terms and conditions online.

The surprise is that Columbia House was still alive to this day, with a business plan that appeared to be built on something slightly less sturdy than the Honor System. “Over the next three years?” In the 1990s, three years usually meant three or more changes of address for me. Thus, I do not believe I ever made a full-price purchase from Columbia House. I guess I owe the company money. I guess it is partially my fault that it went out of business 20 years after I last did any non-business with it.

What killed it? Not that business plan. Not even the thriving existence of iTunes and Spotify and Pandora. By 2010, the company was online only, and it was no longer in the music business. The magazine order cards were gone. It sold DVDs by mail. Netflix and Amazon and the streaming world of cloud-based everything in which we now live are what seem to have delivered the coup de grâce. It took three seismic changes in the public’s entertainment purchasing habits to slay it.

Streaming audio and video have created an interesting phenomenon: the top selling album, in terms of sales of a physical object, only sold 30,000 units this past week. The number 9 album on Billboard’s Top 200 list this week is Led Zeppelin’s “In Through the Out Door,” from 1979, which sold 24,000 units. That album was reissued this month and twenty-four-thousand people my age and up bought physical copies for a physical collection, something I still might have, if only I made a priority of maintaining contact with a storage unit rental company way back when. (It sounds like I made a terrible habit of stiffing everyone.) I would bequeath my CD collection (I had a lot of tapes, too, and some eight-tracks) to Columbia House to try to repay my debt.

And please visit and participate in the Alterna-Prompt, “The Blog Propellant.” TBP offered a very good challenge today and I tried to fulfill it, but I failed. It was, “Write a story with three characters who are named in a will as the beneficiaries of the contents of a small storage unit.” Tomorrow will be here soon.