Last week, I installed the Windows 10 upgrade/update and wrote about it here and here. That second column, “Windows 10: Really Good, Horrible, or Both,” received more comments and suggestions than almost any other.

I think I am ready to deliver a verdict.

First some basics, at least as far as I see them. If you have been using Windows 8, Windows 10 changes a lot of things. It returns us to the days of a desktop that you or I could clutter and fill with files and folders and other icons or keep clean of any icons except the hard drive and the recycle bin. Windows 8 gave us TileWorld, a name I think I made up for the collection of colors and icons that covered the home screen. Users (well, me, I did) greeted TileWorld with the questions, “Why does my computer screen look like someone’s smart phone?” and “Is Microsoft really going to try to sell me an Xbox every waking moment? Am I a character in ‘Halo 5’ right now?”

Windows 8 asked its users to embrace having a split personality: one either enjoyed and used the landscape of tiles, each of which represented an app or in some cases a program or top-tier folder—which left this user, me, thinking, “I don’t own a smartphone, but now I own a 16-inch non-touchscreen smartphone that is not at all a phone”—or one celebrated the fact that one of the tiles was labeled “Desktop,” because clicking this brought one to the classic Windows desktop. That is what I did, every time I started the laptop. As a user, I knew that TileWorld existed, and that on my laptop resided this whole world that I was ignoring every time I powered on and clicked “Desktop” to live and play where I knew how to live and play.

And then when I wanted to power down, I returned to TileWorld, where the “Sleep, Restart, Off” controls resided. As a Windows 8 user, I lived with the knowledge that I was aware that I was choosing to ignore the operating system that I owned. And I know that I was not the only person who did this.

As with Windows 8, the tiles, which again represent apps, are easily edited, moved about, deleted (or “unpinned from start,” as it is phrased). I have the weather, a clock and calendar, and Netflix on mine. And something called Cortana. The start screen that Microsoft gives users upon download includes XBox controls and CandyCrush. Those are easily disappeared. Here is a screenshot from a 2014 article that depicts what I am explaining: 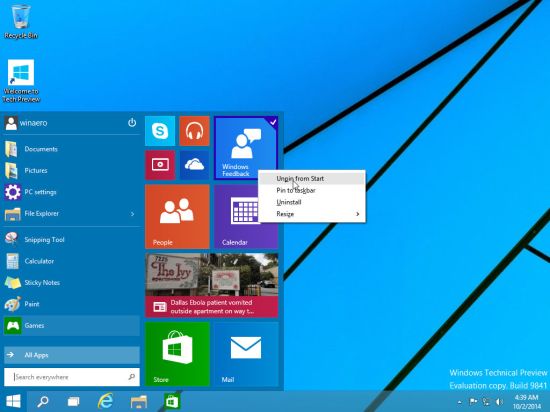 So TileWorld is an integrated part of Windows 10, to be used as the user wants to use it. (I used to be a professional technical writer.)

This is all very nice, but what it looks like and how it presents the contents of one’s computer are things that everyone will either embrace, ignore, or not notice. My laptop is less than a year old and Microsoft just changed its guts: What effect has Windows 10 had on my actual use of the machine? I had two issues with it, and I am still running Windows 10, so the issues seem to be gone in one case and diminished in the other.

I wrote about battery life and noise last week:

Windows 10 seems to be a battery hog and runs hot. One of the first things that I noticed was the unceasing sound of the laptop’s fan. This laptop, an Asus bought for $225 at a well-known retailer, has been one of the most reliable laptops I have owned (I know, I just cursed myself to an eternity of technological heck) … and it has been mostly silent and usually cool, just like I like most everything in my life. From the moment the upgrade was complete, the laptop started to sound like a 747 making an emergency landing at an airport with short runways. And it is that loud for every moment that it is powered on. And it is too hot to place on one’s lap, which is sort of the point to a laptop.

I found a Gizmodo article today that describes the issue. The writer details one of the things that Windows 10 users will either hatehatehate or will grudgingly accept because it is not something that can be changed: unlike previous versions of Windows that would notify users that an update was available (sometimes abruptly, while in the middle of doing something) and request permission to download or delay download to a better time, Windows 10 is continuously communicating with the MotherShip and not so silently updating itself. We no longer live in a world in which our computers are not online, so there is no need to pretend we do. (Come to think of it, this Asus has not yet been powered on in its life without being connected.)

In Gizmodo’s article, Sean Hollister gives a solution and a graphic, which I reproduce here:

Drill down into Power & Sleep, then Additional Power Settings, then turn on Power Saver.

Just about two weeks in, this solution seems to have had a positive effect. The battery does indeed last longer, and silence has been (mostly) restored. The fan runs more frequently than it did in the past, but following the above suggestion re-introduced some quiet. Windows 10 introduced a problem and the solution above did a B+/A- job eliminating it. If you have upgraded your computer, do this. It may even help with battery life in the long run. (Unless you play “Halo 5” all day, in which case you know more about things like battery life than I have yet to learn.)

I have one brand-new complaint, and it is related to things that use up batteries. Windows 10 does not like media much. This laptop handled media from Netflix and video websites just fine. Now, it pauses every five minutes or so, stalls the video but plays the audio, and then the video speeds and catches up to itself to sometimes comic effect. This is not a connection problem, as the video is not buffering. This is true both with the Netflix app and on the web. Now, I know that one of the bells and/or whistles about Windows 10 is that it has a new web browser, which I have not yet launched at all. I use a different browser. I assume that the problem I describe comes from the fact that Windows 10 is in continuous communication with Microsoft for continuous updates and upgrades, and this is only a $225 computer, after all.

I am going to research disabling the updates. Apparently, one can disable the updates, and I found instructions here, and here, but I am not a smart-enough man to implement them.

Here now (trumpet fanfare) is the big problem I had, and the solution. The problem: I could not type on this laptop with Windows 10 installed.

Using an external mouse is apparently frowned upon in today’s world, but I use an external mouse, a wireless and silent Bornd, and I ignore the touchpad. I possess neither the dexterity nor sensation detection in my fingers to tie my own shoelaces, much less control a computer with the touchpad. Windows 8 presented users like me with a setting, and it was the default setting: when a USB mouse is plugged in, it rules.

Windows 10 recognizes my mouse, but it truly privileges the touchpad over it: if I so much as breathe somewhere near the touchpad while I am typing, the cursor is moved to a random spot on the screen. I have so far typed paragraphs in the middle of words and even launched programs without meaning to. I am not a heavy breather, so don’t get your hopes up if you want to phone me. I am an average-sized person, six-feet-plus, so my breathing apparati are no closer to the touchpad than anyone else’s. I do not usually type while garbed in a puffy-sleeved shirt that drags across the touchpad. This phenomenon more than mystifies me, it affects my relationship with typing, period. It has taken me far longer to compose this column than usual.

My theory is that because we live in a smartphone world, touch is important; further, because Windows 10 is an operating system for all platforms: desktops, laptops, tablets (touchscreens), and phones (touchscreens), it grants premium control to any touchable surface a device offers.

The closest thing I have found to a solution is one that scares me, so any and all advice is welcome: Right-click on Start, click on Device Manager, click on Mice and Other Pointing Devices, and disable the touchpad altogether. This feels like something that would have unintended consequences, and those are my least favorite sort of consequences.

After struggling with this problem since July 31, I went ahead and disabled the touchpad last night. Settings > Devices > Mouse & touchpad > Additional mouse options > (Gulp loudly) > Hardware. I selected the touchpad in “Hardware,” and then clicked on “Change settings.” Under “Driver,” one sees the option to uninstall.

Well, that took next to forever. Windows needed to restart. I pretended to read ten pages of Nabokov’s “Pale Fire” while eyeing the blue screen before me. I think it needed to restart again, or perhaps I fainted. That is how long this took. Come on, I thought, where are my unintended consequences, Asus?

The result? I have written this column just like I used to, without the cursor popping up wherever my breath or touch or angry glance might have sent it. That counts as a grade A solution.

Thank you to the many readers who commented on my two Windows 10 posts last week.