Each one of us is a part of an interest group. This does not mean each of us must carry out the duties of being an official representative of said interest group, but, for example, I might be the only Jewish person you know. As such, I try to be a good guy and hope that this represents good things.

(I have been that one before, actually—when I lived in the Midwest—and I had some fun with it. Not that there are zero Jewish people in Iowa, there are, but one couple that I got to know had not met one or they claimed to have not. Which makes me a member of yet another special interest group: I may be the only Jewish person you know who was the first Jewish person someone met or said that they met. Life is full of milestones.)

I am male, middle aged, half-Jewish, half-Baptist, an alcoholic in recovery, tall, thin, and I have a disease that is disabling me. It is spinal muscular atrophy, type 4. Do any of these things merit me tapping on your shoulder and requesting attention from your charitable impulses? Or your attention at all?

The summer of 2014 was the summer of the “ice bucket challenge,” and after a few weeks of popularity, the backlash began. The many videos of people, famous and not, giving a 15-second speech about amyotrophic lateral sclerosis, also known in the US as “Lou Gehrig’s Disease,” and then dumping a bucket of ice cubes and water on themselves “for charity” has led to memes attacking the popularity of the challenge, accusations of “slacktivism,” and some generalized online booing. When we look back at the ice bucket charity awareness campaign, in our heads we will hear someone say, “2014.” We may think silently to ourselves: “I wonder whatever happened with that? Did they cure … what was it about again?”

A former Boston College student named Pete Frates was diagnosed with ALS in 2012. He and a friend with ALS named Pat Quinn started fundraising for research and another friend, Corey Griffin, came up with the Ice Bucket Challenge. (Griffin died in a diving accident in August, right around the period of time when so many people were dumping ice on themselves.) Frates has lost much of his motor functions and the ability to speak, but he became a father for the first time last August.

The ice bucket challenge as an idea was not at first about ALS or any specific health awareness cause. An early version, in New Zealand, was about cancer. Frates, Quinn, and Griffin adapted it to raise funds for ALS research and awareness. It took off from there. In a press release dated April 20, 2015, the ALS Association reported that approximately $220 million was raised through 18 different ALS organizations around the globe in a matter of mere months.

Most of us are not medical researchers but most of us have known or do know someone with a illness or condition. Whether it is cancer, heart disease, or another rare disease, chronic or life-altering illness touches many of us; thus many of us know the powerless feeling that comes upon hearing such a diagnosis. We want to do something about it but we are not doctors. It is frustrating. I have seen the look in my mother’s eyes when talking about my disability. She hates the idea that I have something that she can do nothing about, like cook some chicken soup for me.

So we raise money for the charities that have been established to support the researchers who might possibly find the cure for the disease that affects our family member or friend. Almost every disease has a support community and researchers who are devoting time to study—at minimum—palliative care, or to even find cures.

This is where any controversy lies: How do I know that the dollar I donate will go towards a cure instead of merely purchase lunch for the people who answer the phones and take the donations? Or worse than that, towards nothing at all? Just yesterday, it was reported that four cancer charities operated by one man have turned out to be a real-life form of George Costanza’s “Human Fund.” They bilked donors to the tune of $187 million over a quarter-century. 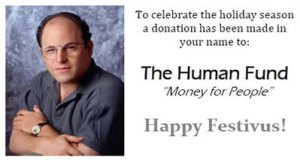 How do I know where the dollar I donate goes? The answer is, I don’t. The fact is that as long as a charity makes its expenses public, I know that some of my donation may be buying lunch for support staff. I hope they are eating healthy. But I also know that some of my donation may be paying for the science-y stuff like test tubes, beakers, machines that beep, bright lights, rent, and a cure. That POS who ran the cancer charities did not run a transparent operation. The scandal lies in the length of time it appears was required to catch him.

As with anything that has become popular suddenly, like a dance craze or a catch phrase, sometimes some part gets overlooked. Did everyone who posted a video of themselves getting wet and icy for ALS explain how to donate to the charity? Did every video participant in fact donate to the charity that they were raising awareness for? No. In the game of telephone that is life, some video participants misinterpreted the whole thing as, “Get wet to not donate and challenge others to get wet, too.” Whatever. Over two-hundred million was raised for foundations that are thoroughly transparent; I can not complain about the dimes that rolled away.

There is no such thing as the social media police, even if I wish there was. Even the people who misinterpreted the “challenge” as one where getting wet meant not donating served a publicity purpose. The dollar that they did not spend on the charity they were not raising funds for was not a dollar that made people sicker. They were merely getting wet.

ALS is a progressive, neurodegenerative disease that affects the nerve cells in the brain and spine. These motor neuron cells deteriorate and die, and they stop sending messages to muscles anywhere and eventually everywhere in the body. The muscles thus atrophy and paralysis follows. It can strike at any age, and it can kill quickly.

Here is where my personal special interest group membership really comes into play: The motor neurons in my spinal cord are deteriorating and dying, and messages are no longer being sent to the muscles in my legs, which are slowly atrophying. This a form of spinal muscular atrophy called “adult onset” or Type 4, and there are many links between SMA and ALS. The two diseases are siblings in the motor neuron disease family. ALS is lethal; SMA Type 4 is not. The experience of having either sucks.

The majority of SMA patients are infants and children, so the majority of SMA patients are voiceless. (Here is a great blog written by a passionate activist with SMA: “Living with Spinal Muscular Atrophy.”) SMA is the number one genetic killer of infants. Few of us are adults. Those of us who are adults owe it to the children born with this disease to help find a cure. Any progress made in finding a cure for SMA will most likely be applicable to also finding a cure for ALS, and vice versa. They are that close in their cause and symptoms.

May happens to be ALS Awareness Month; August is SMA’s spotlight month. August 2015 will once again be the official Ice Bucket Challenge Month.

This summer, if and when someone on Facebook or Twitter or Instagram or Vine challenges you to dump a bucket of ice water on your head for charity, and believe me, they will, please take up the challenge, mention both ALS and SMA in the same breath, include the websites you want to benefit (ALS and SMA and MDA), and dump the water. And then donate to one or to both. One man, Chris Mosher, below, used the challenge to bring attention to both diseases:

Free all U.S.-held political prisoners and prisoners of war!

Modeling for commercial photography and videography

NO LONGER ENCUMBERED BY ANY SENSE OF FAIR PLAY, EX-JOURNALISTS RETURN TO ACTIVE DUTY TO FIGHT THE TRUMPIAN MENACE!

It is what it is