Every year, Ulster Savings Bank, an upstate New York institution (it was my bank for years), holds an online vote to pick a nonprofit organization for a cash award. The top award is $3000, which is not much, but as I have explained in previous articles, every bit helps in the rebuilding of the damaged parts of the sculpture park. You do not need to be a Hudson Valley local to vote.

If you click on this link right here: (Mid-Hudson Heroes), you will find Opus 40 at the top. If you have a Facebook account, you can vote. Further, you can vote every 24 hours between now and March 6. Opus 40 is only one of approximately 150 nonprofit organizations being recognized by the bank, so every vote counts.

Built in an abandoned bluestone quarry in upstate New York by one man, Harvey Fite, Opus 40 is a contemporary American version of Stonehenge or the collection of Easter Island moai. 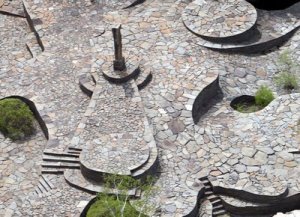 Fite was a sculptor and fine arts professor at nearby Bard College when he purchased the bluestone quarry in the 1930s. If you have ever walked on a sidewalk in Manhattan, you have walked on bluestone from this or a nearby location. Using the rubble that had not become NYC sidewalks, Fite filled one six-and-one-half-acre section with hand-laid circles of bluestone paths and ramps, leading nowhere and everywhere, from fifteen feet below the ground level up to the magnificent centerpiece, the obelisk, a nine-ton, three-story-tall single stone, which from different perspectives seems to point at the nearby Catskill Mountains, join with the range, or appear to be the reason nature put the Catskills there in the first place.

Harvey Fite working at the base of Opus 40

Working between between 1939 and 1976, Fite did it all alone, using ancient techniques. A history of the site describes the project: “Working alone, and largely self-taught, he built the gallery of rubble from an abandoned bluestone quarry on the property, using an adaptation of dry key stone masonry, a traditional technique which involves the mortarless careful fitting of stone upon stone.” At first intended to be a showcase for his smaller scale works of art, his wood and stone sculptures, over the 37 years that he worked on it the site itself became Fite’s life work. He died in 1976, three years shy of the 40 years that gave Opus 40 its name. By the 1960s, when various artists started to create large-scale environmental art pieces, Fite had been at work on his own project for decades.

Hurricane Irene in 2011 and Hurricane Sandy the following year delivered a one-two punch to the sculpture park; Irene saturated the ground beneath the ramps and walls, and Sandy’s damage included a collapse of a 14-foot-tall support wall. Fite’s stepson and his family have engaged the efforts of master stonewallers and stonemasons, who are using those stones that fell and can still be fitted together and finding others from local quarries to repair the damage and rebuild the broken sections. Where possible, they will employ Fite’s own tools and techniques to complete the repairs.

An estimated $30,000 was calculated to be needed to fund the first stage of the work, and here, not very ancient techniques were employed: an Indiegogo campaign was started to raise the funds. Between March 16 and May 14, 2014, when it closed, $32,000 was raised. Even though the Indiegogo campaign was a success, and is now closed for donations, it was a success for the first stage of restoration work; it is estimated an additional $60,000 will be needed for future work, to be completed in 2015. Opus 40 still has a donation page with its Indiegogo donation rewards listed for those interested in giving: Opus 40 Membership and Donations.

A video was released last fall showing the scale of the project and the challenge presented by not using hydraulic machines but using a gin pole and other man-powered equipment to lift and move the stones into place:

In the summer of 2012, master stonewaller Sean Adcock of North Wales, United Kingdom, and Tomas Lipps of the Stone Foundation, in Santa Fe, New Mexico, led a team in taking down and rebuilding a portion of Opus 40’s 11-foot-tall central ramp to demonstrate the feasibility of restoring the collapsed wall. More recently, during the summer of 2014, a team led by stonemason Timothy Smith of Clermont, New York, completed prep work for the restoration, removing and stacking the loose stone. Later phases of the restoration are scheduled for this year.

Last fall, the Cultural Landscape Foundation (TCLF) released its annual “Landslide” list, what it calls a “thematic compendium of threatened and at-risk landscapes and landscape features.” Eleven nationally renowned sites were named, and Opus 40 is one of them. The TCLF describes the sites as “eleven examples of land-based art from ancient petroglyphs to earthworks, folk art creations, single artist, multi-acre installations and others threatened with demolition, neglect, poor maintenance, vandalism and lack of funding.”

The page that the Cultural Landscape Foundation dedicated to Opus 40 has more history and beautiful photos, like the one at the top of this article, by Thomas Hahn: Opus 40.

Once again, please take a few seconds today and all the tomorrows through March 6 and help in the restoration of an internationally famous art landmark that happens to be dear to my heart: Mid-Hudson Heroes.

* * * *
How did it come to be dear to me? If I had not been a student at Marist College in the 1980s, where Harvey Fite’s stepson was teaching (he is the gentleman narrating the video above), I quite possibly would still not know of Opus 40’s existence, even though I lived in the same county. My teacher-friend grew up at Opus 40 and still resides there. I envy that it is his home. In the early ’90s, I attended another friend’s wedding at Opus and in the summer of 1998, I volunteered there, helping direct parking for that year’s music acts. The quarry is a natural amphitheater and the obelisk is an eye-grabbing stage set; the concerts that summer included a blues festival, the band Orleans, and Pat Metheny.

One concert at Opus 40, in 1982, has become legendary. The jazz great Sonny Rollins was performing and the documentary great Robert Mugge was there to film the concert; the film was released as “Saxophone Colossus.” Here is a brief clip, in which you can see how spectacular the place can be:

If you do help out, thank you very much.