W.D. Richter has so far directed only two films in his long film making career; neither was a hit. In the 1970s and ’80s, he was one of Hollywood’s more successful screenwriters, authoring films in several genres, from sci-fi to adventure.

A movie a year was made from his scripts from 1976 to 1982, and several were huge hits that are still fondly remembered: the remake of “Invasion of the Body Snatchers” starring Donald Sutherland, “Dracula” starring Frank Langella (Richter adapted the stage play), “Brubaker” with Robert Redford. His most recent film listed on IMDB is a movie from 2005 called “Stealth” starring Jessica Biel.

But one film that he directed in 1984 is remembered most fondly by those who remember it at all.

For those who love “The Adventures of Buckaroo Banzai Across the 8th Dimension,” anything I write here will be ridiculed for being incomplete (“How could he leave out …?”), and for those who have never heard of it (my girlfriend), any attempt to sketch out the plot will make me sound like I am being purposefully obscure. (Why is the U.S. President in traction in a hospital? It is not explained, he just is. One is okay with it or one is not.) And any movie that requires this sentence before outlining the story—”You need to watch it twice before you decide whether you like it”—is a movie that obviously inspires devotion or offended indifference. I am a devotee.

Buckaroo Banzai (Peter Weller, who later played RoboCop) is a neurosurgeon, rocket scientist, inventor, rock star, adventurer, and hero in a comic book franchise. In the film’s first half-hour, he has performed successful brain surgery on an eskimo, driven a rocket-powered Ford F-350 through a mountain, and played a music gig in New Jersey. He has also learned that he should not have visited the 8th dimension, as his visit interfered with the existence of aliens who live there, who for some reason are Rastafarians in accent, and who demand that he re-capture one of their renegade co-hort. Or else they will take control of our nuclear weapons and fire them at the USSR, an act that will lead to the end of the world. “We will be forced to help you destroy yourselves,” they helpfully explain. Buckaroo and his crew, who are also his band and are also heroes in the comic books, have their work cut out for them.

Some film making background. When the Angels of Death killed all the Nazis at the end of “Raiders of the Lost Ark” in 1981 and the film-going public spent hundreds of millions of dollars to see the film, studios decided to send out just as many angels to find similar adventure scripts. Anything that smacked of being a comic book in origin, or purported to be a comic book that no one had read yet, any story that dropped viewers immediately into the action and paid us the compliment that we would figure it out and ride along with it, the studios wanted.

If a script read like it would make a good comic book or an old-fashioned B movie, it seemed to get green-lighted by the studios. (We are in a similar era with movie franchises based on comic books, but these are superhero comic books, Stan Lee comic books, that already have their mythologies in place. They are not being made or responded to as if they are good B movies.) Of course, comic books were partly invented to be print’s answer to cinema, so any movie that is crafted to “look like” a comic book (Ang Lee’s “Hulk”) is sometimes off-putting, like looking at a mirror in a mirror.

(“High Road to China” is one of these several “sort-of” Indiana Jones movies, and legend has it that Tom Selleck was awarded the starring role as a consolation for turning down the role of Indiana Jones so that he could start filming the first season of “Magnum, P.I.” His rare act of loyalty to a production was not unnoticed. The television show did pretty well, too.)

It was almost a genre unto itself: a convoluted action-adventure set in exotic locales and in not-so distant time period with a hero who is presented as if you have idolized him for years and this is merely his latest adventure story, with more to come.

Into this strode Buckaroo Banzai. Richter had a friend, Earl Mac Rauch, who was writing (and still is writing) Buckaroo Banzai stories. At the time, he was not publishing them, mind you. Not submitting them. Sometimes not even finishing them. Richter thought these would make a great movie or series of movies. More than one studio agreed; watching an Indiana Jones market emerge from nothing that had existed before may have made a name like “Buckaroo Banzai” sound like how dollar signs look.

20th Century Fox made the film for $17 million in 1984; for comparison, Paramount Pictures spent $18 million in 1981 to make “Raiders of the Lost Ark.” That is almost a tie. “Banzai” was given a big budget and a big cast.

The movie loves its one-liners, many of which have become catch-phrases (“laugh while you can, monkey-boy,” “wherever you go, there you are”). Many of its funniest lines are asides, a part of an atmosphere, heard over loudspeakers in the background (“lithium is no longer available on credit”), competing for a viewer’s attention. This also describes the movie on first viewing: what am I supposed to be paying attention to? The plot? The jokes? Are they jokes? Is it making fun of something I am unaware of? Is it making fun of me for not laughing? Is it an adventure, a mystery, a comedy? Is it funny? What if it is a documentary? “The deuce, you say.” 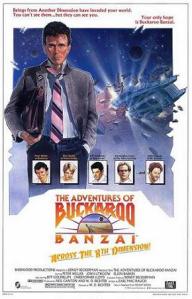 Fox did not know how to market the finished product. The summer of 1984 was the summer of “Ghostbusters” and “Indiana Jones and the Temple of Doom.” Confronted with those two juggernauts, Fox attempted an early form of viral marketing, setting up tables at Star Trek conventions, but there was a new Star Trek movie out that summer as well (“Star Trek III: The Search for Spock”). It was up against three juggernauts. Even the movie poster is non-educational. The text (“Beings from another dimension have invaded your world. You can’t see them, but they can see you. Your only hope is Buckaroo Banzai”) tells me it is sci-fi, and the image of a spaceship … exploding? … screams sci-fi, but that overly long title tells me it is going to be like Indiana Jones. Or something. Television ads and trailers were made, but not shown. The film sank without a trace and only made $6 million.

I was 15 and part of my movie-going budget for that summer is in that $6 million. I loved “Raiders” but was not interested in sequels. (To this day, I have not seen any of the Raiders sequels.) I wanted something like “Raiders” but was going to be different. Buckaroo Banzai’s overly long title made me think it would be “like ‘Raiders'” but different; it grabbed me, and then I discovered something that really was different. A movie that appeared to not get its own comedy but whose comedy and charm lies in that fact. It takes seriously how unserious it is.

It also had the best end credits.