For most of 1928, James Joyce’s attention was unequally divided among many projects and complications: He was keeping a wary watch over German and French translations of “Ulysses,” his 1922 novel; readying sections of his next novel, which was still officially titled “Work in Progress” (published as “Finnegan’s Wake” years later, in 1939); defending “Work in Progress” from negative reviews and letters from friends who were urging him to quit his experimental writing; explaining to his patrons when new sections of “Work in Progress” could be expected so that he could have an income; and losing his eyesight.

He was 46 years old, living in Paris with his partner, Nora, and their two children, and life was complicated. He was engaged in writing the novel that became “Finnegan’s Wake,” and his artistic ambition for it and its effect on him were both unsparing. “Ulysses” tells a story of a single day, June 16, 1904, in a particular place, Dublin, using as many types of storytelling and modes of rhetoric as he could use. Joyce intended “Work in Progress” to do the same thing but for the idea of nighttime; it is entirely inside the sleeping and dreaming mind of some unknown person, and it is written in a sort of pidgin English animated by puns.

His letters to his patrons tended to obscure matters even further and made it more challenging to continue funding his project. In one 1927 letter to his most important supporter, Harriet Shaw Weaver, he wrote something with “the intention of enlightenment,” as his biographer Richard Ellmann cheerfully puts it, but what he sent read:

I am making an engine with only one wheel. No spokes, of course. The wheel is a perfect square. You see what I’m driving at, don’t you? I am awfully solemn about it, mind you, so you must not think it is a silly story about the mooks and the grapes. No, it’s a wheel, I tell the world. And it’s all square. (Ellmann, 597)

Weaver tried to get in the spirit of his constant riddling and urged him to square the wheel, a suggestion for which he thanked her but further explained that he was doing something different than that. By 1928, financially and artistically discouraged, he declared to one friend

Critics who were most appreciative of “Ulysses” are complaining about my new work. They cannot understand it. Therefore they say it is meaningless. Now if it were meaningless it could be written quickly, without thought, without pains, without erudition; but I assure you that these twenty pages now before us cost me twelve hundred hours and an enormous expense of spirit.” (Ellmann, 598)

Thus, Weaver traveled from London to Paris in 1928 to see for herself how things were going, on the occasion of Joyce’s 46th birthday. The visit reassured both parties and later that year he received word of an advance payment from two American publishers.

This is the James Joyce captured in Berenice Abbott’s famous portrait of the artist: At rest and a bit more confident in his world. The left lens in his eyeglasses is shaded, evidence of the ongoing battle to save his sight. It is one of the two or three most famous photos of the author, the one fondly parodied on the album cover for “If I Should Fall From Grace with God”: 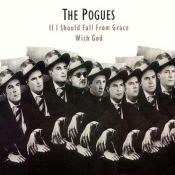 Abbott was an American who became more famous in later years for her portraits of New York City during the Great Depression. She spent the decade of the 1920s learning her craft, working with the photographer Man Ray, and opened her own studio in 1927. She had photographed Joyce before, in 1926, and that photo session saw the author wearing an eye patch after surgery (and a soul patch under his lower lip):

Joyce apparently liked sitting for Abbott, as there are several other photos from the 1928 session, without the stylish fedora and cane, but obviously from the same session, as he is wearing the same striped necktie. I think the one at left captures Joyce with more feeling; perhaps without the protection the hat and cane afforded him he let his guard down. The iconic photo of an iconic literary figure is followed by a photo of a weary, but not wary, momentarily confident, 46-year-old artist.