A very long time ago, in a country very far from here—France in the 1820s—people were alive and kicking. They lived their lives only but dimly aware that things they did and said might be remembered and still used by people two centuries later. In other words, to turn a phrase, to not take matters lying down, and to put it bluntly, French typesetters of the era came up with the word cliché, and the world as we know it has not been the same since.

Once upon a time, I was a technical writer involved in content creation and document management. But enough about me. When one is creating manuals and finds that certain instructions and specific illustrations will be of use in more than one manual, it is time-saving to create those passages and illustrations only once and use them as needed in other documents rather than create each one afresh each time. (Which tended to be my method because I am very good at wasting time in what one might call an "office.")

In professional circles, this is called single-sourcing, and I will not get more technical than that. When writing a document that is going to include a basic series of instructions or a standard illustration, one writes, "Insert A here" and whatever software one is using will insert "A"—that piece of prose or drawing—in that spot in your document. It is conceivable that one could write an instruction manual that is merely a series of tags referring to text from lots of other instructions that were written for other things, and a document will be created that will be ignored by building contractors across the country or dads next to Christmas trees everywhere.

The concept has existed since soon after the printing press was invented. Printers know that there is no good reason to spell out each word every time when setting a press. Certain words recur ("recur" is not often one of them, oddly enough). The printers would order up—or forge for themselves—plates with commonly used words.

By the 1800s, printers were making plates with entire phrases on them, however. Idiomatic expressions, commonplace exclamations, trendy words—you know, the best of the best, the cream of the ...

The most commonly heard sound in a printer's life is the sound produced when making the plates that will be used in the books that are made. It is a click. French pressmen coined a verb, clicher, to imitate that sound. Some particularly witty printer turned the verb into a noun, cliché, to refer to a plate that he seemed to use and overuse again and again, ad infinitum.

When a writer employs a common expression seen one too many times, a long-dead anonymous French printer is making a clicking noise from the great beyond. Spare this long-suffering soul and avoid clichés, please.

It is a bit of a cliché to remind writers to avoid them. The late William Safire, a writer for politicians who later wrote about politics for the New York Times, authored several bestselling books about writing. In one, he offered what he called "fumblerules," or writing "mistakes that call attention to the rule." One rule is, "Last but not least, avoid clichés like the plague." He certainly did. His most famous written expression came in a speech for his boss, then-Vice President Spiro Agnew. In a passage in which he complained about the media and a perceived liberal bias against his Republican president, Richard Nixon, Agnew called members of the press corps, "nattering nabobs of negativism."

All clichés can be delivered with feeling, however; sometimes le mot juste is merely a commonplace phrase. Here is Mr. Safire's gravestone, for example: 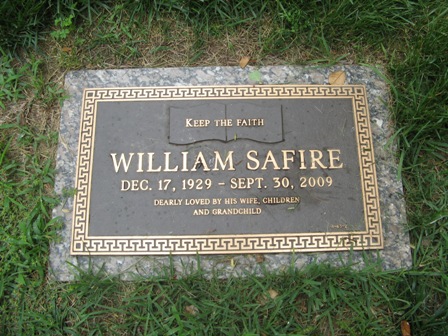 Is this William Safire's final "fumblerule"? I hope not. No, William Safire's last message to all and any who might find themselves gazing upon the stone above his dust is a cliché, "Keep The Faith," and that is A-OK. He said it, he meant it, thus there will be no tongue-clicking from me at what might have been his truly final rule for writers: A phrase is not a cliché if you mean it deeply enough.