It took over a decade for the Rosetta space probe to travel approximately four billion miles. While not exactly a meander through the inner solar system—for several years it has been traveling at 34,000 miles per hour—its looping journey to Comet 67P/Churyumov-Gerasimenko actually led it be misidentified once, seven years ago this week, when astronomers noticed a previously unidentified asteroid heading our way. It was even given an asteroid name, 2007 VN84, before it was correctly identified and everyone laughed uproariously.

In August, Rosetta arrived at Comet 67P/C-G, its destination for the entire trip. Three times, the probe’s path brought it close to its home planet, which provided a gravitational swing each time to throw it farther away from the inner solar system. In one complicated months-long maneuver, it swung out by Mars, took a boost from that encounter to return to Earth at a faster speed, and then passed Mars again; that solar system pick-and-roll flung it into the asteroid belt, the rock quarry orbiting between Mars and Jupiter. The European Space Agency has provided an interactive website to illustrate this: “Where is Rosetta?”

The comet is as old as comets are, billions of years old; it is made of stuff left over from the formation of the solar system. Comet 67P is a comet stuck in a stable orbit around the sun; it does not venture far beyond Jupiter’s orbit and does not come much closer to the sun than inside Mars’ orbit. One orbit, one year on Comet 67P, is about six and a half years. Every three years it is as close as it will come to the sun and every three years it is as far away as its orbit takes it. Thus, for Rosetta and its lander, it offers no surprises but many discoveries.

Right now, the comet is in the asteroid belt and making its return to the inner solar system. For the first time, it has a hanger-on. Today, Comet 67P, the Rosetta space probe, and the Philae lander are traveling partners 310 million miles from Earth.

It is the ideal comet to attempt to land on. Other comets, with longer orbits, like Halley’s Comet and other Oort cloud objects, develop a long tail as they come close to the sun, heat up, melt a little, and throw off material. They become unstable. This was spectacularly seen one year ago, when Comet ISON disintegrated as it approached the sun. Comet 67P has been through this process countless times already and is probably not going to heat up and eject too much material, but if it does, science will have a close-up seat.

In September, it started to heat up and gave Rosetta some spectacular views: 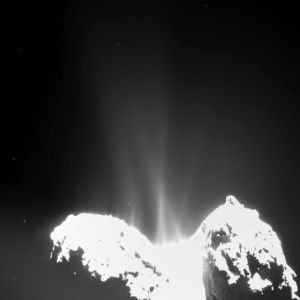 Right now, comet and company are traveling at over 40,000 miles per hour, or 18 kilometers per second. As remarkable as that is, the manipulations and maneuvers to land Philae on the surface—which is dusty and icy and rocky and there is no way to know how stable that surface is or how thick the dust is without getting close and risking everything in a one-and-done landing attempt—slowed the lander to a one-meter-per-second speed after dropping it off. So the lander was traveling 40,000 miles per hour with the comet, and one meter per second closer to the comet, and the landing was not smooth: It bounced, but not off the comet entirely. Harpoons were supposed to secure it, but they did not fire for reasons still unknown. A few footpad screws appear to have been enough to settle the lander in place; millions of miles of travel and it was just like building a desk from Ikea: the big bolts that you were sure you weren’t going to use were never needed in the first place.

I’m on the surface but my harpoons did not fire. My team is hard at work now trying to determine why. #CometLanding

As Rosetta approached the comet earlier this year, it became apparent that the object had a complicated shape, that it has one big section and one smaller section. It is shaped like a rubber duck, and my affection for ducks is well-known. The lander is on the comet’s head, which is the smaller part, only about a mile and a half by a mile and a half.

This may be the most amazing fact of the whole project: the comet is not the size of a planet or even an asteroid; it is tiny. There is no human-sized comparison one can make to this without sounding ridiculous. It is like shooting a paperclip at a taxiing 747 and hitting an open window and landing it in a seat in first class. Or: Imagine you are driving cross-country at top speed tomorrow morning. Let’s say you are in Texas and the road is wide-open; it is like the world belongs to you. You hear your cellphone ring, try to locate it, find it but bobble it awkwardly in your hands; you accidentally bounce it out your open window, and then learn that it landed in someone’s hands while they were on top of the Eiffel Tower. Sounds silly, but it does not come close to matching the feat that the European Space Agency successfully accomplished today.

And now comes the science-y part.