If the photo above is not of the actual car that my family owned in 1979, it is the same model Chevy Malibu station wagon that my memory has chosen to remember as the actual car that my parents drove to cart my sister and ten-year-old me around that summer and every other summer, before 1979 and after. (My memory is not what it used to be: It is better!)

Our family road trips over about two decades included vacations in Vermont (to see family) and weekends on Cape Cod, in Pennsylvania, along the Connecticut shore. We were not a wealthy family, so our family vacations were always road trips to a destination that we could reach in one day or less of driving. My father was the only driver, so this was more than fair. The long(ish) car ride was simultaneously unendurable and somehow, maybe sometimes, the only part of the trip that was worth remembering.
END_OF_DOCUMENT_TOKEN_TO_BE_REPLACED

I never looked for his book online or in a bookstore. He showed it to me, or he showed me a galley proof of it. And now I do not remember his name or much about the book.

We were on a plane, and 98% of my personal air travel history dates from the years 2000 to 2004, when I moved from upstate New York to Cedar Rapids, Iowa, and twice a year I returned home for holiday visits. The typical route was Eastern Iowa Airport to Cincinnati/Northern Kentucky International Airport to Stewart International Airport or Logan in Boston, because there are no direct flights between Iowa and anyplace else I have ever lived.

Sometimes I am a tense passenger, one of those who grips the armrest so tightly that I may as well pocket it and carry it home, and sometimes I am relaxed and almost human. Air travel offers an intensification of experience; one deals with emotions not often felt on the ground, from the fear of permanent change to the excitement of temporary reunions.
END_OF_DOCUMENT_TOKEN_TO_BE_REPLACED

One could define Hell as the experience of the sensation of wanting to be any place other than where one is at that moment. In the proper wrong circumstances, your bed could be rendered almost as uncomfortable as an MRI tube.

If I convince myself that the seat next to mine presents a better view of the movie screen and I can not slide into it because you are there, ask me in a couple hours what the film was about or who was in it.

Walk through any strip mall shopping plaza on a Sunday afternoon: not only is the place bereft of customers, not one single employee wants to be there, even for the money. Or a Walmart after midnight. Every employee is elsewhere, Walter Mitty’ing their way through life, perturbed to be where they are. Perturbed to be. That is a variety of Hell.

Sic transit gloria mundi, there goes the beauty of the world, in four-hour half-shifts working at a job one does not hate exactly—because hate is a strong enough emotion to inspire actions towards real change—but dislikes, detests, disdains. I detested myself when I disdained my jobs.

* * * *
One could also define Hell as the Albany, New York, Greyhound bus station. No one appears happy to be in a bus station, neither the transiting passengers nor the employees. An extended stay in a bus station is the experience of boredom minus information.

Airports present a vast panoply of human experiences, from the fear of permanent change to the excitement of temporary reunions. I have experienced emotions that I have not encountered elsewhere in my life in airports. I realized that I had fallen in love with someone 60 seconds too late in an airport once upon a time. (More correctly, I think that I thought I ought to have gotten a phone number.) I almost missed my next flight in indecisively wandering around O’Hare while debating whether I should run “just like in a movie” to what I thought was the terminal my desired companion had told me her flight was leaving from. If you did not know, O’Hare is too large an airport to be indecisive in.

A wait in a train station is boredom plus information, as the trains are usually on time and people willingly, even happily, strike up conversations. Grand Central Station or Penn Station in New York, South Station in Boston—look at this photo: 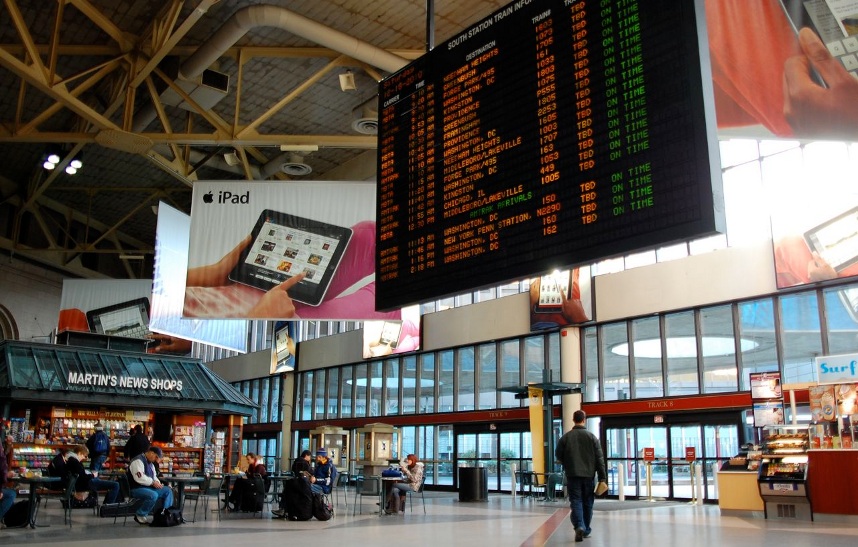 Boston’s South Station: Filled with sunlight and advertising and well-stocked newsstands. Look at that happy place. (Photo from Wikipedia.)

In memory, this is truly what South Station looks like: full of light. In truth, I remember once sitting beside the late journalist David Halberstam as he waited next to the Martin’s News Shop (see above) for the Acela train to whisk him off to New York City and the two of us watched a man throw up on himself on a bench not eight feet away. I was rendered mute by both seeing someone I idolized and that sight. The great writer was spared an embarrassing “I’m a big fan” speech from me, but maybe I missed making the scene into a conversation-opener. (Mr. Halberstam has since passed away, something that was perhaps hastened by the incident.)

In America, there are only a couple reasons one is in a bus station for an extended period—overnight, say—and two are the side effects of unhappy circumstances, like not knowing anyone in town. A typical long distance bus journey includes a couple changeovers and long breaks between legs in the trip. A traveler has to stay somewhere and if one is the only person one knows in Cleveland, Ohio, (for example) one might spend eight hours walking around the neighborhood, which looks a lot like this photo that I did not take one overnight stay in Cleveland in June 2000: 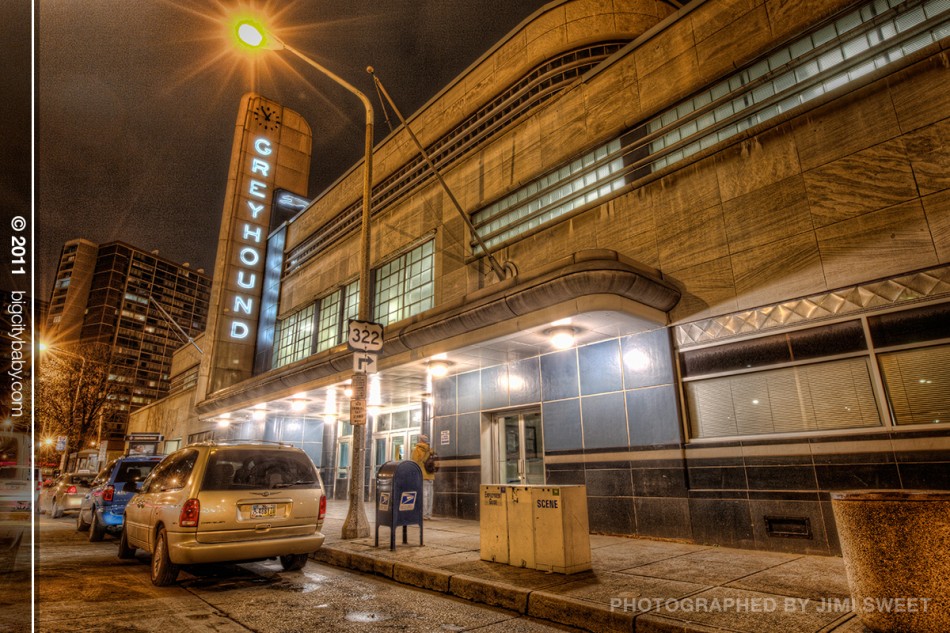 But the Albany Greyhound Station? No one wants to be there. No traveler or bus driver wants to spend more than 27 seconds there (I have never seen a driver enter the facility; they remain beside the bus even after passengers have collected all bags and boxes, as if afraid the vehicle will be stolen), and no one in a position to change things in that great city wants it to be there, either. For almost 30 years it has sat atop both Greyhound’s list of buildings that need to be replaced or rebuilt and Albany’s. Each wants to see what the other will do before acting. The building’s continued existence is the picture of a stand-off, as no one will invest time, money, or care in the place if it is always about to be razed and rebuilt by the other entity. Greyhound wants to see what Albany will do, and vice-versa. (Here is a recent article.) 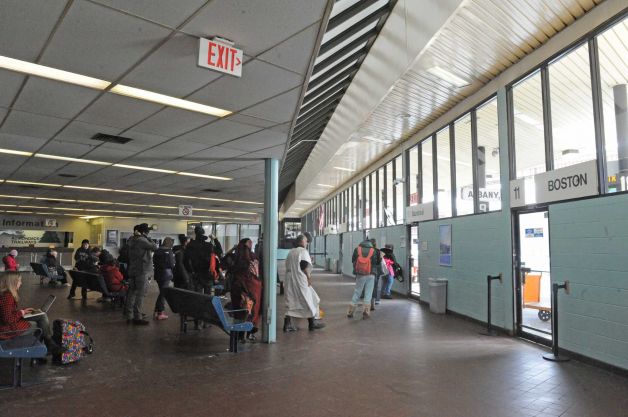 Any photo will make the Albany bus station appear benign. Do not be fooled. (Photo by Michael P. Farrell/Times Union. From http://www.timesunion.com/local/article/Churchill-Albany-s-Greyhound-station-is-a-5320974.php)

Yet there it stands, dingy and apart. It is a reminder that life ends, but bus stations are not supposed to be memento mori. 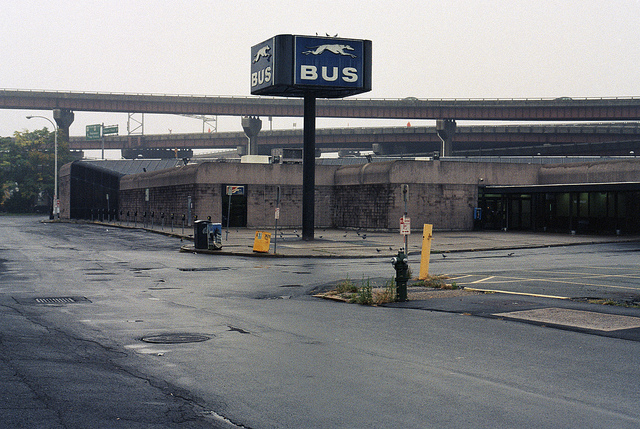