I wish you could have known Matt Coleman. Many did, but not enough. There was not enough time. “Matt’s heart was so big, it surrounded him,” one of his colleagues wrote in a memorial tribute.
I am grateful that I happen to think this about so many people that I have met, those sentences like “You ought to know so-and-so,” or “You should have met my friend, X,” but I am frustrated that I have not said it out loud often enough to the people about whom I thought this. Matt already knew most of my friends, anyway, and the one friend I introduced Matt to, well, Matt asked her out. Or she asked him.
A person’s end should not be what the world knows of them, though, and eight years ago today, August 11, 2011, my friend Matt Coleman was murdered. No one’s death should fight for attention with the person’s life, so I will briefly give the end and then celebrate a gorgeous life.

END_OF_DOCUMENT_TOKEN_TO_BE_REPLACED

I wish you could have known Matt Coleman. Many did, but not enough. There was not enough time. “Matt’s heart was so big, it surrounded him,” one of his colleagues wrote.

I am grateful that I happen to think this about so many people that I have met, those clauses like “You ought to know so-and-so,” or “You should have met my friend, X,” but I am frustrated that I have not said it out loud often enough to the people I thought this. Matt already knew most of my friends, anyway, and the one friend I introduced him to, well, Matt asked her out.

A person’s end should not be what the world knows of them, though, and four years ago today, August 11, 2011, my friend Matt Coleman was murdered.
END_OF_DOCUMENT_TOKEN_TO_BE_REPLACED

I wish you could have known Matt Coleman. Many did, but not enough. There was not enough time. “Matt’s heart was so big, it surrounded him,” one colleague wrote.

I am grateful that I think this about so many people that I have met, those clauses like “You ought to know,” or “You should have met,” but frustrated that I have not said it out loud often enough.

A person’s end should not be what the world knows of them, and three years ago today, August 11, 2011, my friend Matt Coleman was murdered. If you type “Matt Coleman Mendocino,” or variations that include the names of the small towns in that beautiful county in California, you will see some of the eye-catching news headlines from the time. This is because the murder was a national news story for a month, not because of my friend’s prominence, but because his dead-eyed killer shot and killed one other man, and the manhunt that followed in the redwood forest stretched on for 36 days, ending with the shooting death of the murderer. Three families lost loved ones that terrible month: the family and friends of Matt, the family and friends of Jere Melo, and the family of the murderer. The killer suffered from untreated schizophrenia, as it turned out, but this gun-filled story took one more gun to conclude it.

At least one book has been published about the sad tale, told from the point of view of law enforcement. In it, Sheriff Tom Allman of Mendocino County recounts Matt’s memorial service, and it sounds like the memorial was a fitting tribute to the Coleman I knew: “Boats of flowers were floated down Big River and many positive things were said about the deceased. It struck me as very odd that nobody was angry. … I was so struck by the community’s love for Matt Coleman. He had no enemies. As I left, somebody asked me if I thought the killer was at the funeral. ‘I doubt it,’ was my reply.” (From “Out There In The Woods.”) I am certain that the sheriff learned that day something that I believe: That Matt Coleman’s last conscious thought was an offering of love and empathy.

There was sadness at the memorial, I am sure. Despair or anger, no. Matt was a generous spirit and the most generous gift he offered was that all who met him became more generous, too. I believe I have met that quality only once and I realize now how lucky I am for that one moment in time.

Matt was a land steward, a passionate environmentalist who worked for the last six years of his life as coordinator of volunteers for the Mendocino Land Trust, which meant that he knew the forest, knew the ocean, and knew the land between. There are many stories about his 24-hour-a-day dedication to the land and waters, about him stopping whatever he was doing when he would spot an invasive plant species and remove it.

Invasive species or not, Matt was always at his best as a student, learning what brought the species of plant or fish into the part of the world that he was a part of, understanding the natural history, teaching others about humbly understanding. Look at him in this video, shot by Aron Campisano a few years ago as part of a film he is making about invasive species:

Before Mendocino, there was New Paltz. In my 1990s in New Paltz, New York, Matt Coleman and others (John, Sean, Mat, others like Gerry and Dan) were the big brothers I never had and taught me a lot about being a writer, an actor, and about being a man.

Coleman, mid-grin. This is the look I saw when he threw me over his shoulder.

One day, a few of us were walking as a group up Main Street in New Paltz, and Matt, a bear of a man, slowed his stride—he always walked very quickly and purposefully—and I slowed with him, probably to continue belaboring whatever point I was belaboring. He grabbed me and tossed me over his shoulder like a duffel bag, a bag of me, and took off running. To our eternal comedy credit, we did not break off whatever conversation we were engaged in. The others followed, laughing. I was the one out of breath when he let me down at the top of the hill that is Main Street in New Paltz.

Matt had an extensive collection of books but not in his possession. Upon finishing a book, he gave it away or left it somewhere. More correctly, Matt had an extensive collection of books in his memory banks and he could grab a quote at will. His reading was extensive, legendary among friends, and he never showed it off. He was a journalist and loved great writers like John McPhee, Edward Abbey. If he was a fan of someone, his enthusiasm was total, unembarrassed, and loud. I am certain Elvis Costello heard Matt from inside the Beacon Theater one night while we were waiting to be let in.

He had one of the greatest screams I have ever heard. 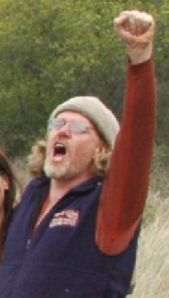 While preparing this post, I returned to Gifford Pinchot’s “Eleven Maxims to Guide Foresters.” Pinchot was the first head of the U.S. Forest Service and a two-time governor of Pennsylvania, and his mansion, Grey Towers in Milford, Pennsylvania, is now a historic site. Matt and I visited it once because I lived near it at the time and yet, strange to Matt, had not been to it. I enjoyed the house and its history, and Matt patrolled the grounds; Grey Towers is like a zoo for plant species and Matt impressed the rangers with his practical knowledge. (This is why I thought of Pinchot in connection with Matt.)

1. A public official is there to serve the public and not to run them.

3. It is more trouble to consult the public than to ignore them, but that is what you are hired for.

4. Find out in advance what the public will stand for. If it is right and they won’t stand for it, postpone action and educate them.

5. Use the press first, last, and all the time if you want to reach the public. Get rid of the attitude of personal arrogance or pride of attainment or superior knowledge.

6. Don’t try any sly or foxy politics, because a forester is not a politician.

7. Learn tact simply by being absolutely honest and sincere, and by learning to recognize the point of view of the other man and meet him with arguments he will understand.

9. Encourage others to do things; you may accomplish many things through others that you can’t get done on your single initiative.

10. Don’t be a knocker; use persuasion rather than force, when possible. Plenty of knockers are to be found; your job is to promote unity.

11. Don’t make enemies unnecessarily and for trivial reasons. If you are any good, you will make plenty of them on matters of straight honesty and public policy, and you need all the support you can get.

Matt is inscribed in many of these lines. “Don’t be afraid to give credit … use persuasion rather than force … .” Matt probably quoted these to me at the time, but I did not know. Later that day, we drove north of the Catskill Mountains and a bald eagle swooped at my car. “Dude! Did you see what that was?! How great was that!” It remains my one bald eagle sighting to this day. His voice is pinned to the memory. And many others.

He was “Clawman Treefeller” in our group of friends; he was Coleman; he was a verb (any missing lighter had been “Coleman’ed”); he was Matt.

Matt’s generous spirit, immense playfulness, and epic inquisitiveness brought him from Brooklyn to the woods of Northern California. His humble nature led him not to chase fame or glory but to a life restoring the lands near Mendocino, pathway by pathway. It is that beautiful brief life and that ever-giving, often hilarious spirit that some of us on two coasts celebrate today, August 11, simply because our path crossed his.

* * * *
The Community Foundation of Mendocino County established an endowment fund in 2013, the Matthew Coleman Fund for Environmental Education and Conservation. An “endowment fund” is one in which the funds that are donated are not only applied to the cause but are also invested to earn interest and keep the fund alive. Here is a brief video: