The only unsolved hijacking of an American plane took place on November 24, 1971, almost 45 years ago. A person who may or may not have been named “Dan Cooper” hijacked a plane over the Pacific Northwest and demanded $200,000 and several parachutes. His demands were met, and he then demanded a flight toward Mexico City at a low altitude and slow rate of speed.

About forty-five minutes into the flight toward Mexico, somewhere over Washington state, at night, during a rainstorm, the man jumped. He and most of the money have not been found. The case remains an unsolved mystery. Because of a news media error, his name was reported as “D.B. Cooper,” and so the daring unknown hijacker has remained known by that mistaken moniker.

In 2007, an FBI Special Agent named Larry Carr opened the case files to the public to regenerate interest in the cold case and develop any new leads, if any could be developed almost four decades later. With no government funding, a team of investigators, called “Citizen Sleuths,” donated time and effort to study the case for three years and concluded nothing concrete but outlined the dozen or so most important lines of inquiry and debate.] 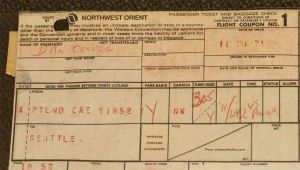 On Thanksgiving Eve, 1971, a man bought a one-way airline ticket from Portland to Seattle. In that pre-TSA era, no photo ID was copied and the passenger simply gave his name and the ticket sales clerk wrote it down: “Dan Cooper.” It was a twenty-dollar ticket and he paid cash. He boarded the plane, a Boeing 727. There were about forty people on board, passengers, crew, and “Dan Cooper.” He was wearing a dark suit, loafers, and a light, businessman’s raincoat. He carried a briefcase.

Cooper lit a cigarette, ordered a drink, and handed a note to the stewardess. She took it, did not read it immediately, and walked away with it still folded. He got her attention again and bade her to read the note, which stated that he had a bomb and was hijacking the plane. He showed her the inside of his briefcase, and it had wires and looked like a bomb.

The stewardess conveyed the message to the pilot and he contacted the ground. In 1971, airline hijackings were surprisingly frequent: several dozen took place each year and the federal Sky Marshal program was brand-new. After the Cooper incident, passengers and their parcels began to be scrutinized more thoroughly and regularly. Hijackings became a thing of the past in American skies until a later, more famous, incident a few decades later.

The airline ordered that his demands be met. The demands: $200,000 in “negotiable American currency,” four parachutes, and that the plane be refueled in Seattle. None of the members of the crew who dealt with the man reported that he had a foreign accent, but the phrase “negotiable American currency” has perplexed everyone who has investigated the story. Who says that?

Foreign or not, he was polite. He remained in his seat, ordered and consumed a second drink, paid his tab in cash, and offered to buy meals for the crew when they landed, to thank them for their trouble. On the ground, the money was delivered to the plane, the other passengers released, the nonessential crew released. Ten-thousand twenty-dollar bills had been assembled in several bundles of one-hundred bills each inside a knapsack, but each bill had been photographed, too. The serial numbers were thus tracked. The plane was refueled, and it took off on a route towards Mexico City, the hijacker’s stated destination.

But the hijacker also had requested parachutes and that the plane be flown at the lowest altitude and slowest speed to maintain flight; he also wanted the cabin depressurized. He was to be left alone in the cabin with the parachutes, and the aft stairs (at the back) were to be left down. (Since the Cooper incident, most commercial jets no longer have a aft set of stairs.) Told that such a configuration would be difficult to fly, he replied that he knew it would be safe, but would allow the flight to take off with the staircase in a stowed position. He would figure out how to open it himself, he informed the crew.

About twenty minutes into the second flight, the crew detected a whoosh of air: the aft door had been opened. When they radioed to him to offer assistance, he refused any help, and that is the last anyone ever heard from the hijacker. Several minutes later, the tail of the plane bounced, which indicated that he had jumped.

It was night, it was November, and it was raining. The air temperature outside the plane at its low flying altitude has been estimated as a −70°F wind chill. The hijacker did not change clothes from his dark suit, raincoat, and loafers, but he did take off his tie and leave it on the plane. So a man in dress-casual attire jumped from a 727 at night from 10,000 feet over a lot of forest. In that pre-GPS world, it is not known what land the plane was over precisely when he jumped or when he pulled the ripcord, if he ever was able to. The plane, which was being trailed by military jets—but not for the entire trip, and not at this precise moment—landed in Reno.

The search started immediately, and in its own way, it continues. The ground beneath the flight route has been scoured thoroughly, both on land and in the bodies of water he might have fallen into. Only two items have been found to date, and both were found years after the incident: the plane’s instruction card for lowering the back stairs, and a small portion (290 bills) of the money. None of the serial numbers from the rest of the money that was given to him have ever turned up in currency, so the money has not yet been spent anywhere on the planet. No one, not in Canada or America, neither a family nor an employer, reported a missing person in that time period who matched or came close to the description of the man who jumped from the plane.

Anything written about the hijacker’s life before the incident is speculation, even when it is from detailed forensic analysis. For instance, it is now understood that his necktie, which he left on the plane, had DNA evidence on it and that it also bore minute particles of pure titanium, which is as curious as that sounds. Almost no one is exposed to pure titanium, but enough people are exposed that this clue is not a clue at all.

Several bundles of the cash turned up in 1980, but not quite where Cooper might have landed; they were heavily weathered, but they still in rubber bands, which should have disintegrated between 1971 and 1980 if they had been exposed to the elements from that night in 1971 till they were found. Further, the area in which the money was found had been searched previously, and the bundles had not been found at that time. Also, they were not complete bundles, as one was missing ten bills, but not from the top or bottom, the outside of the bundles. The missing bills were missing from the inside.

If Cooper was killed in the jump, nothing has turned up—no body, no items of clothing, no bones, and none of the money—in terrain that would not thoroughly absorb a human being’s existence. Except it did.

Whoever Dan or D.B. Cooper was, he probably never knew that he became an outlaw folk hero. Many novels, songs, movies and TV show episodes have offered fantasies about the case and about the outlaw who got away. In the TV show Twin Peaks, Kyle MacLachlan’s FBI agent character is named Dale Bartholomew Cooper, and the show is set in the Pacific Northwest. No characters comment on this, but when you think about it, it is as if Agent Cooper “parachuted into” the community.

For Cooper Sleuths, keep an eye out for a suspect from Canada, with military experience in airplanes. He would have come to this country to work in or around titanium metal fabrication. He was a gentleman, well dressed and smoked cigarettes. He was not the type to shy away from medication and knew his way around machinery, as well as the woods. Most notably, he probably lived a normal life and had one big problem that required about 200K in cash to solve.