The Martin Prosperity Institute has not yet released its annual survey of all things Halloween, because today is not Halloween and impatience will not change this fact.

Their work last year in the field of Halloween enjoyment, a study not seriously undertaken by most people older than eight, but a subject that the Institute has studied for three years in conjunction with the Atlantic Cities, led to many national news articles expressing shock at its conclusion: that the best place for Halloween in the United States of America is Poughkeepsie, New York.

To reiterate and emphasize key points: 1. There are fifty states. 2. All of those fifty states are pretty important in the lives of the people who live in them. 3. There are lots and lots of cities in many of those fifty states. 4. I, however, have only one hometown, and it was voted Halloween Central last year by a major little-known Canadian institute of counting things up and measuring the assessments in extremely professional ways. (Or assessing the measurements. Whichever. It was exciting news. More candy corn?)

The Washington Post expressed its perplexion with a judgmental headline, “Is Poughkeepsie, N.Y., the best place to trick-or-treat tonight?” Okay, it was not all that judgmental. Maybe it was a little sneer-y. A little dumbfounded. Perhaps a little, um, jealous?

How did the MPI come to its conclusion (since we both love my hometown so much, I think I can call the Martin Prosperity Institute by the more informal “MPI” or even “Marty”) that Poughkeepsie does Halloween better than … oh, I could list every city and hamlet in the country here, but I am no Grinch … everybody else?

According to its press release last year, titled “Trick or Treat? The 2013 Halloween Index,” the MPI measured “five variables that are integral to a successful Halloween: candy stores (per 10 thousand), costume rental stores (per 10 thousand), children aged 5-14 (share of metro population), population density, and median income.” Now, while Poughkeepsie does not rank number one in any one of these five categories, it ranked so high across the board that it beat second-place Chicago, Ill., (the 2012 winner).

See for yourself. Here is a very precise representation: 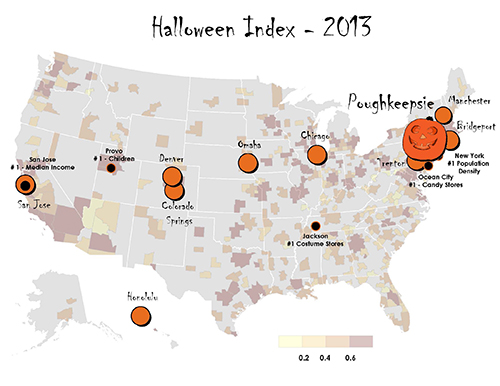 Poughkeepsie has the biggest pumpkin!

According to itself, the Martin Prosperity Institute “is the world’s leading think-tank on the role of location, place and city-regions in global economic prosperity.” “Marty” is based in the Rotman School of Management in Toronto, Canada, which is a lovely city and might be a great Halloween destination for the adventurous Halloween traveler, but Poughkeepsie.

It should come as no surprise for those of us who grew up in Poughkeepsie that our hometown is the fake spookiest or candy-sweetest or the best Halloween town in America.

Any October visitor might notice how many fly-by-night (erm, seasonal) costume stores appear along the Rt. 9 corridor every fall, or the large number of short-lived candy shops, or professionally run haunted houses, or the fact that there is a gigantic freaking (and real) cemetery smack in the middle of the whole darn Rt. 9 corridor. For those visitors—business travelers and ghouls alike—this study makes plenty of sense.

It would have made a lot of sense to my sister and me and our elementary school friends if you’d told us this back in the 1970s. I was never a particularly enthusiastic trick-or-treater. As a less-than-enthusiastic cub scout, tasked with selling items from the most boring scout catalog ever printed (two items that I remember are plastic campground dining gear and peanut brittle that outlasted the plastic dining gear), I already knew my way around the neighborhood and knew which houses were owned by people I did not like seeing in bright daylight, much less at dusk. The plastic masks—Fred Flintstone, Spiderman, Superman—were each identical except for the paint job, did not line up over my eyes, much less my eyeglasses, and were held in place by the flimsiest rubber band yet devised by human ingenuity. I could not breathe in them. Each had a cape—even Fred Flintstone, I am sure, or perhaps that was my mother’s ingenuity to keep me warm—and none earned me much candy. My less than enthusiastic cub scout side always trumped my slightly more enthusiastic begging-for-candy side.

Bordering our neighborhood, on two sides, was “The Woods.” Google Maps will convince you that the wooded area between my neighborhood and the Hudson River was not impressive, was merely undeveloped and undevelopable land left to rodents and deer and pricker bushes and some extraordinarily ordinary maples and oaks. The untrained eye will see, driving along the country road bordered on one side by The Woods, that one can clearly see to the Hudson River and unmistakably hear trains on the Metro-North line a few dozen yards away. I pity my 2014 eyes and ears. Because I knew, just knew, in 1977 that those trains came off their tracks and plunged howling into The Woods at night. And some of those rodents and deer had never before been seen by the eyes of man. They were feral and wild and wildly feral. (Never mind those firepits or the plastic forks or … is that peanut brittle?)

One Halloween Night, in 1979, I was allowed to venture on foot, not accompanied by adults and in costume (hold that thought for a second while I address my parents: What!?!) from my neighborhood to my best friend’s neighborhood, which was connected to mine by Barnegat Rd. The Woods, the scary Woods, borders Barnegat Road. Do I need to repeat this?

The best friend, Doug, loved to tell tall tales. Whenever he hosted me for a sleepover there had been a plane crash in The Woods the night before that no one was investigating (there had been no such incident) or a car had plunged down the embankment into The Woods the other night and exploded and the driver got out on fire (there had been no such accident) or his Polish grandmother had told him that there would be ghosts in 1979 that hadn’t been seen in many many years (he had no Polish grandmother). Doug was five days younger than me and creatively lazy and this made him a respected authority in my eyes. (I hope he is someone’s parent nowadays.)

At just the perfectly wrong moment, while he and I walked from his neighborhood back to mine, loot in our identical plastic pumpkin pails, just as he was committing with his words some luckless fictional airplane pilot to a fiery death earlier that very day a mere few feet from where we were walking, just then, my flashlight went dark. We started to walk at a faster pace. There truly are few streetlights on that road, and even fewer in my memory. I had never seen a night so dark or learned of a death so imaginable. Just then, we heard a sound. A low, rasping scream of an anguished, crying creature—Doug had found his true calling as a storyteller, at least this one night, and both of us bolted from what was obviously the ghost-tortured mortal remains of his burned-up pilot or a ghost of a train engineer come to steal us from Poughkeepsie, which for us was already the best Halloween city in the country.